CGS : When did you first get in touch with Build/Mapster?
Leonardo Pellegrini (DavoX) : I first started using build when a friend of mine came to my house with a huge bunch of Floppy disks containing Duke Nukem 3D. We spent a long time installing it but in the end it was a blast! After some time playing it I decided to look around the installation folders and found something awesome, something called "goodies". The folder with cool stuff in it, one of them being the build editor!. As soon as I learnt how to set it up, I couldn't stop.

CGS : What was your first map, released or unreleased?
Leonardo Pellegrini (DavoX) : Probably some huge room with 100 enemies and 10 devastators. Unreleased.
The first one I've released though it Buenos Aires Explosive 1.0 (Not the remake). It was published on a spanish magazine called PCMania. I sent it over to Europe in an envelope with a Floppy disk.

CGS : What is your favourite among your own maps?
Leonardo Pellegrini (DavoX) : Hmmm I really like both maps I've made for the Duke Nukem Forever 2013 DLC. It's though for me to choose but if it was for gameplay, architecture and all that, I would choose The ultimate stadium Remake.
But if it's for the people's reaction and the amount of love I received, I would definitely go with the Motorcycle map. I loved making it and always wanted to do something like that since I started using build.

CGS : How many maps have you done?
Leonardo Pellegrini (DavoX) : For Duke probably around 20. Counting mods and all that. Released probably 7 or 8. I've had a long hiatus away from Level Design when I was a teenager (Spent 6 years skateboarding).

CGS : Do you listen to music whilst mapping? If so, what did you listen to?
Leonardo Pellegrini (DavoX) : It really depends. I don't focus on just one genre of music. I could listen to rock one day and then classical music the other. Game soundtracks are also very inspiring. Killer instinct one for example. Or even old games like Prince of persia or Theme hospital hehe.

CGS : Do you see mapping as competitive?
Leonardo Pellegrini (DavoX) : Nah. I think there's always the small incentive of wanting your map to get a really good score. To some people that's their only motivation and it's fine. Whatever lets you be creative, you know?
I don't think there's a competition between mappers, at least not in the Duke Community. Everyone's always ready to help you and give feedback on what you're doing. It's a small community but it's definitely great.

CGS : Do you still touch Build/Mapster?
Leonardo Pellegrini (DavoX) : Yes. Right now I'm teaching level design once a month on events using Mapster32. This way I can show them how easy it is to use it and how quickly you can come up with a basic level that you can improve later on.

CGS : What's your favourite map of all time?
Leonardo Pellegrini (DavoX) : That's a though one. I know I have a special place in my heart for Gambini's map "Luciano Land". Which I played from that PCMania magazine. That map showed a gas station being blown up and I just fell in love with explosions because of that. In some way he's responsible for me being so hooked up on this game and level design (Countless hours on the phone talking about mapping!).
If it's about architecture, I will always be amazed at the stuff Mike Vonskellington (Micke sundvall) Made for City Crackdown. Amazing.

CGS : What are your opinion about the HRP and Polymer projects?
Leonardo Pellegrini (DavoX) : I think they are very good. The problem with polymer of course is it's bad optimization. I hope we can make Polymer maps one day with no framerate issues. I think it's the biggest show stopper.

CGS : What other games do you fancy?
Leonardo Pellegrini (DavoX) : Working in the industry has made me play other kind of games besides FPS. And that's a good thing. I've been playing lots of 2D platformers lately and I'm currently trying to bring a project like that to life. I will be documenting all about it, from idea to post mortem after sales.

CGS : Finally, is it something you'd like to say to the DN3D community?
Leonardo Pellegrini (DavoX) : Thank you. If it weren't for this community I wouldn't be working on the industry right now. The help I've gotten over the years is just invaluable. I've learnt so much watching you guys create and play it's ridiculous, and for free! I don't believe I would've learnt so much in another place.
Make maps, no matter how big or small, they will all be useful one day. Never think for one moment that what you're doing is worthless or anything like that. I know I've had my fair share of doubts when spending all day locked up in my room making maps. But in the end, it was a Duke Nukem 3D map that I've made which convinced the guys at the first company I've gotten interviewed at to finally hire me. Not some fancy Unreal Tournament 3 map (Which I've showed them too) but a friggin Duke3D map!
Don't give up. Keep mapping. 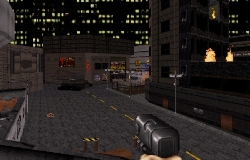 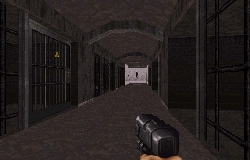