CGS : When did you first get in touch with Build/Mapster?
papamonos : My first contact with Build was twelve years ago, when I got my first PC and a copy of Duke Nukem (I played it before in PSX version).

CGS : What was your first map, released or unreleased?
papamonos : My first and released map was 'Welcome Home', the first level from 'Total Apocalypse' episode. A previous version of this mod was released level by level, and finally revised and released as a 11 levels mod.

CGS : What is your favourite among your own maps?
papamonos : If we speak about Duke Nukem, this is 'Criaturas de la Noche' (Creatures of the Night). This has dark ambient, a big city plenty of streets and passages. Also this has a non-linear gameplay to be free for make your own way to the end. Really I did put a lot of work and caress in this.

CGS : How many maps have you done?
papamonos : I have uncountable works, from Doom 2 to Duke Nukem (the most), including one single map and two mods for Doom 3.

CGS : Where do you get inspiration from?
papamonos : I specially look at the real world for urban sceneries. For fiction (space stations, hell...), I think about original maps according the own game, other games and my own crazy mind. Occasionally I'm inspired from some Iron Maiden covers and other band songs.

CGS : Do you listen to music whilst mapping? If so, what did you listen to?
papamonos : Yes, usually Metal and Rock, alternating with relaxing music as "New Age" according to my concentration needs and/or spirit.

CGS : Do you see mapping as competitive?
papamonos : Not at all. I make maps only for entertainment and the only compensation is to release them for the player's enjoyment. Without this, my works just would be losing time and effort.

CGS : Do you still touch Build/Mapster?
papamonos : I do not edit nothing for Duke Nukem for seven years ago, involved in Doom 3 engine. But recently I resumed a little contact with Mapster, and who knows... I have a lot of ideas everywhere, but my free time is too limited.

CGS : Are you playing any DN3D maps these days?
papamonos : Some weeks ago I played two or three maps by William Gee (WGSpace series). Also played some original episodes again.

CGS : What's your favourite map of all time?
papamonos : Uncountable maps along many years. Probably my favourite is "Hotel Hell" or "Freeway" from original "Shrapnel City", but really this is a hard question to answer.

CGS : What are your opinion about the HRP and Polymer projects?
papamonos : I have tried it from the early versions. This is good work, nice textures, 3D models and light effects. But personally, I always had prefer the classic graphics but high resolutions. This is not exclusive for Duke Nukem, also with other older games as Doom and Quake 2.

CGS : What other games do you fancy?
papamonos : In my adolencence I played a lot with my PSX console, but since I discovered Doom and Duke Nukem (15 years ago) I normally play only a few FPS games as Quake series, Unreal and Crysis. Recently I take some more time for PSX emulators and modern PC games as Wolfenstein: TNO, last Tomb Raider's trilogy or Resident Evil HD.

CGS : Finally, is it something you'd like to say to the DN3D community?
papamonos : Keep Duke Nukem alive, supporting mappers and/or creating your own maps. Special thanks to everyone for playing my maps. It really is pleasant for me to know that my older maps are still present in the community!!! Finally, visit my website (papamonospage.orgfree.com) to get all my maps. It's Spanish and out of date, but I will edit the page soon, including an English translation, and to upload my latest maps for Doom 3!!! 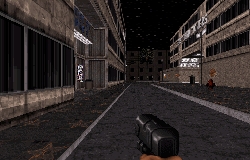 Living on the Wildside

Living on the Wildside