Age : product of the mid 80ies
Location : Belgium
Occupation : None

CGS : When did you first get in touch with Build/Mapster?
Alias Conrad Coldwood : I remember I got the game back in 96 and I've been messing around with Duke3D at least until Half-Life got released... so I probably gave a shot at Build after completing the original campaign.

CGS : What was your first map, released or unreleased?
Alias Conrad Coldwood : Wow. I was a kid back then, I really can't remember. I think they still might be on my old HDD, but I'm having a hard time getting it to work with modern computers. They maps are probably lost though.

CGS : What is your favourite among your own maps?
Alias Conrad Coldwood : I like Insurance Overload for the back-tracking, but I wish I it had the feel of Back alley. St Duke is... meh.

CGS : How many maps have you done?
Alias Conrad Coldwood : Tons, but only released three for Duke3D: Back Alley, StDuke, and Insurance Overload. Back Alley was released (checking) in 2006, so I hadn't mapped anything for eight years, it was just a test to make sure I remembered how Build work. It's inspired by Resident Evil 3: each street is divided in such a way it's more of a hallway (narrow sidewalks, streets locked by doors and the like). StDuke was just a standard hospital. That was... eleven/tweleve years ago? I think I made that in about ten days. Something along those lines... Insurance Overload was an attempt at designing a map with proper back-tracking (I'm not a huge fan of "one-way maps"). Wasted waaaay too much time because I poorly planned the layout.

CGS : Where do you get inspiration from?
Alias Conrad Coldwood : You can have a crowd watching the same painting and they would focus on different things (color, composition, technique, light, theme, meaning, ...) I tend to pay more attention to construction and design, than theme or meaning. I look at Doom and Quake maps, then compare with stuff like Soldier of Fortune (where maps are very linear) and wonder how a SoF map would look like with a Doom layout... I ask Google image to come up with nice pictures and wonder how it could be integrated in a bigger structure: "where could lead that door", "what's behind that wall",...

CGS : Do you listen to music whilst mapping? If so, what did you listen to?
Alias Conrad Coldwood : For the layout part, I tend to listen to trip-hop, ambient, big bands... when it's done I switch to rock. Oddly, golden sixties work pretty well for designing, putting props and details, and play testing.

CGS : Do you see mapping as competitive?
Alias Conrad Coldwood : I'm not very competitive. Plus, I'm like the Laura Palmer of Build Engine ("see you in twenty five years"), so everybody else wins by default. That being said, it's when I heard Stephen King claim "I have seen the future of horror, his name is Clive Barker" that I started to think that maybe you don't really compete with other people in the same field. If you compete for a price, then the price would be your fans? That would be weird to come to someone and say "you have to pick one, you can't just enjoy both our work". I'm not sure I get it, I'm not into competition.

CGS : Do you still touch Build/Mapster?
Alias Conrad Coldwood : A few months ago, I designed a small deathmatch map around a pool. I also made a single player map inspired by a deathmatch area from Duke Zone! I'm happy with neither, I probably won't release them.

CGS : Are you playing any DN3D maps these days?
Alias Conrad Coldwood : I streamed a play through of Duke3D, Atomic and DC not so long ago. I rarely play custom maps because they tend to go on and on. Thinking about it, it's my main complaint against Gradius too: I need an intermission every now and then, some time to breath, and feel like I actually completed something. I did play Duke Hard however and I liked it.

CGS : What's your favourite map of all time?
Alias Conrad Coldwood : I like Raw Meat from the original game. I'm not sure why, but I always liked that one.

CGS : What are your opinion about the HRP and Polymer projects?
Alias Conrad Coldwood : I mostly like what has been done, but I also tend to play the game without modern features (dynamic lighting, high resolution textures, or models)... I don't have a very strong opinion about it.

CGS : Finally, is it something you'd like to say to the DN3D community?
Alias Conrad Coldwood : Keep havin' fun! 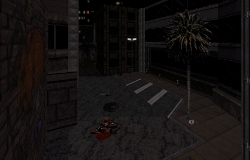 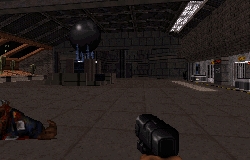