CGS : When did you first get in touch with Build/Mapster?
sT1LL_WAnTeD : First Time using Mapster was in 2014, when i was 20 years old.

CGS : What was your first map, released or unreleased?
sT1LL_WAnTeD : First map I made was supposed to be a DM map called "Killers Basement". I ended up scraping the level so it was unreleased , but a year later after gaining some practice on Mapster I started "Killers Basement" from scratch. Making it a SP only map, maybe also add DM in the future.

CGS : What is your favourite among your own maps?
sT1LL_WAnTeD : South of Heaven of course, i went all out really taking my time working on that map. (construction over a year on and off).

CGS : How many maps have you done?
sT1LL_WAnTeD : 9 maps , 7 of them being released.
First map (killers basement) unreleased and the new and improved killers basement is about to be released.

CGS : Where do you get inspiration from?
sT1LL_WAnTeD : Mostly music, heavy metal. Also looking at other maps or other games.

CGS : Do you listen to music whilst mapping? If so, what did you listen to?
sT1LL_WAnTeD : I always listen to music while mapping, mostly heavy metal bands like Slayer; Metallica, Sepultura, Anthrax, Megadeth, Obituary, Pantera, Lamb of God.
Music is a big part for me while mapping. It seems easier to get in the atmosphere of the map and stuff like that. For example, if I'm making a hell level. . . I listen to some hellish heavy metal s#!t , that simple haha

CGS : Do you see mapping as competitive?
sT1LL_WAnTeD : Hell yeaaah!!! I try making maps that I don't think I've seen before, or try to go over the top and exaggerate the level to something bada$$

CGS : Do you still touch Build/Mapster?
sT1LL_WAnTeD : Yeah, I released "South of Heaven" a few days ago. Might start on a new project sooner or later, only time will tell.

CGS : Are you playing any DN3D maps these days?
sT1LL_WAnTeD : Yea i frequently try out the 4 latest maps added on CGS.

CGS : What's your favourite map of all time?
sT1LL_WAnTeD : aww shiiiiiiiiiiiiiiiiii, thats a tough one. . .
I would have to pick a bunch since picking one would be impossible haha
Some would be: Duke Nukem forever 1.0, Roch series, KaiseR Land 03: Time to get medievil, The flaming ship wreck, Turok series

CGS : What are your opinion about the HRP and Polymer projects?
sT1LL_WAnTeD : Its pretty neat, nice to replay Duke Nukem 3D with the Polymer and see the difference of maps you already know. I rarely use it but its sweet. Wouldn't mind seeing more Polymer maps.

CGS : Finally, is it something you'd like to say to the DN3D community?
sT1LL_WAnTeD : Long live the community!!! and Cheers! Have a beer! 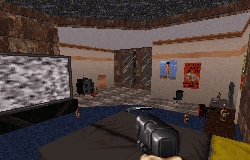 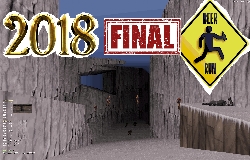