An odd sort of urban map with several settings.
There's the above ground city, subterranean lava caves, some kind of underground hedge maze, alienesque rooms, and several more rooms and locations with odd and seemingly random texturing.
The layout below ground is fairly linear, but navigation can be challenging due to the hostile environment.
The layout of the above ground city is open and allows you to roam where you wish aside from the locked buildings.
The final portion of the map is another maze that is seemingly textured at random.
The level is large, but isn't as big as it seems because of the nature of the game play. This map is like that skinny kid with the elephant ears, big nose, extended over bite, raging acne, and head harness dental brace. If you're into serious button solving puzzles and can get past how ugly it looks, you might enjoy its company when nobody's looking.

Game play consists mostly of solving switch puzzles. There are keys, but they seem secondary in comparison to the rest of the level.
Traversing in the initial underground sections of the map can prove difficult at times due to invisible doors. There's no obvious clue as to the location of the doors and they look just like the rest of the wall, so having to randomly click around can prove a point of frustration. It's also based on riding a train across a lava river, hoping you're in the car that lines up with the door you want, finding a switch, then figuring out what opened. This can also be a subject of frustration if you get on the wrong car or get off at the wrong stop which can easily happen since there's no indication of what just unlocked.
The train takes a bit to do its full circuit, so you may be waiting some time before it gets back to your stop.
The upper city isn't as bad, but it's still nothing but a huge button puzzle and you may spend alot of time running from one side of the map to the other. Clues as to where to go are provided by a few view screens, and at the switches in the form of a "picture" indicating the texture of the building or door that just opened up. There is one annoying hidden button that unlocks an equally hidden door, but some screens showing the wall texture of one of the hidden switches helps a little.
The final maze also has a few hidden buttons just to stay on par with the rest of the map.
Combat is also two different worlds. Underground there's loads of health and ammunition, but enjoy that while you can. Once the city is reached there's not as much in the way of supplies unless you come across the armory. The overall total amount of supplies is on the high side of balance, but the map has over 900 enemies to deal with. 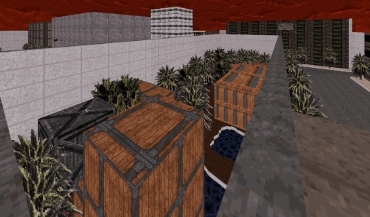 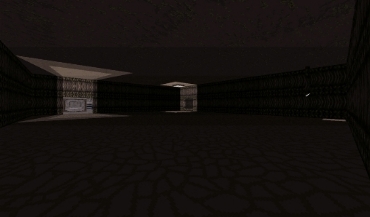 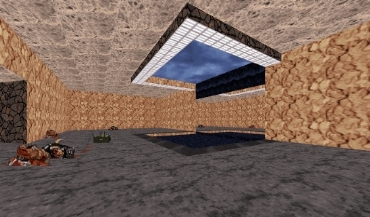 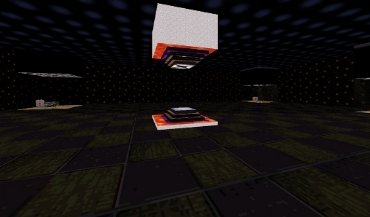 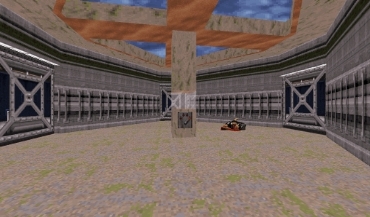