Review by EmericaSkater on January 13-2012

AT A GLANCE:
Duke 12:12 is the sequel to Forge's predating map Duke 6:8. I haven't gotten the chance to play the latter, but I'm finding myself wanting to check it out now that I've given this thoroughly badass map a complete run through. Give it a shot and you probably will, too.

THE GOOD:
This is one of those maps that, in strict terms of progression, plays relatively linear, but feels nonlinear thanks to the general layout, the huge, open spaces and the creative use of background scenery.
For the most part, progression itself is a pretty straight-forward keycard hunt (controlled for the first set, whereas the second set's scattered throughout map's main "mall" hub).
Spritework was the main emphasis for this map and it's done extraordinarily well.
Sprites constitute entire floor plans of some buildings and you honestly wouldn't know that just by looking at them; it's all done near-flawlessly. This doesn't, however, mean Forge limited the spritework to level architecture, as it's also put to clever use for simple decoration. The inside of a mechanic's shop in the beginning of the map is a good example of this, where just a few sprites are used to make suspended winches and other neat things, showing an imagination few other mappers (myself included) manage to achieve.
Gameplay is solid too, with there being a decent (thin at first, but stronger later) ammo/enemy ratio, and plenty of health. The open spaces that comprise much of the map make for some fun firefights, and it all culminates in a brilliantly designed boss-fight with a Cycloid Emperor in a bombed-out chunk of urban environment.

THE BAD:
Duke 12:12 ought to tickle everyone's fancy. There's very little you could logically complain about in terms of gameplay, but there are a few things worth noting.
The spritework (decorative, at least) tends to be a bit of an obstruction in the areas outside of the mall, both for the player and the badguys. Ordinarily this would be fine, but there are a ton of hitscan enemies here, and they can wear you down pretty fast while getting conveniently hung up behind phonebooths, parkbenches, etc. One memorable instance was a fat commander that drifted up behind me while I was trying to untangle myself from some palm-trees, fired a rocket and wound up blowing us both to pieces (while creating a nice bonfire out of the trees).
Apart from this, there are a few masked walls that should've been given an extra hitscan flag. One of these areas is in the map's strip-club. After catching the attention of a few octabrains, I ran into an adjacent office, thinking I could get some cover there, and a window in the office wall would help me figure out a safe way to exit and attack them. Imagine my surprise when the octabrains floated up to the window and passed right through it. Live and learn, I guess.

THE UGLY:
Forge said that this map wasn't technically complete, which seems crazy when you think of the overall design, the well-executed placement of enemies, and the fact that beating the map took almost everyone that played it at least half an hour. Nevertheless, after completing the map's last keycard hunt and entering an EDF base, you'll see scant traces of what he's talking about.
Design takes a bit of a backseat here, with bland, squarish rooms, weak lighting and not much attention to trimwork, but it all picks right back up when you reach the final area of the map.
It's recommended that this map be played in 32 bit. Software causes some clipping issues with the spritework (on my end, anyway).
Score: 95 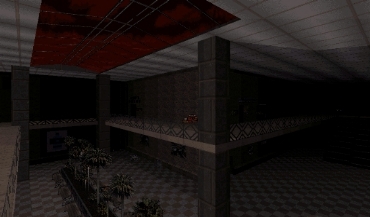 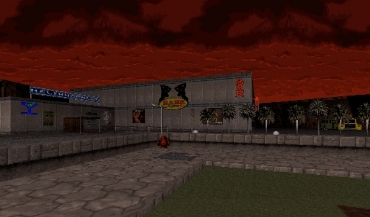 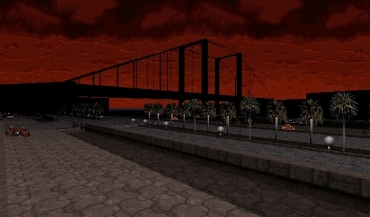 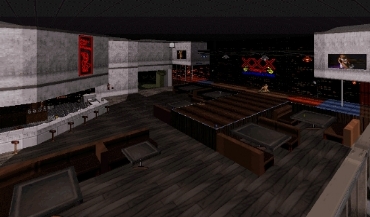 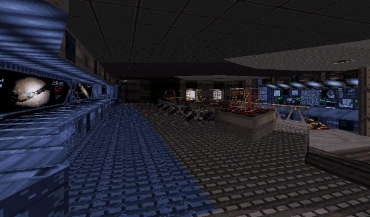