To install use 7-zip to extract the files out of the 25thcd.exe file. Run the 25CDUKE.bat file to rename art and con files. If the original 25c.con gives a bunch of errors rename the included 25c.con to user.con and overwrite the original. Launch Duke3D and select the first episode. Regardless of what the template says, this mod will run with the atomic version of Duke3D (at least with eduke32 and the con fix).

A six map episode with new art.
It doesn't expand much on the basic game other than having two pistols and a new skin for what is otherwise the operational same freezthrower.
There are a few interesting ideas and concepts, but there's nothing extraordinarily special about any of the levels. They all have areas that are really well done in addition to the numerous garden variety of just ordinary and unadorned locations.
How the episode progressed from high tech, city, and industrial to medieval doesn't really make any sense and is never really explained.
The texturing and shading are decent enough to get by on, the base architecture is solid, but the lack of trimwork and under use of new art brings the overall quality down. It's like cake without the frosting.

The first level consists of navigating between skyscrapers via terraces and platforms.
Climbing around on the outside of buildings and engaging in fire fights while dozens of stories up from the ground is pretty interesting, but the rooms inside the buildings are hit and miss. Some are decently detailed while others are pretty simple and plain.
Alot of uneventful back and forth kills the flow of action.

The second level is more skyscraper action, but most of the map takes place inside instead of on ledges and scaffolding. The rooms have more of a variety than the cookie cutter apartments from the first level, but the hallways and a few locations could have been better detailed.
The player can get stuck if jumping from one building to the adjacent structure with lower terraces. There's no way back.
The layout is also more extensive and includes some extended ventilation duct work, but like the first, the backtracking is quite uneventful.

The third level finally takes the player down to street level an through a small food concession stand and an adult nightclub brothel. Some rooms are well done, others are generic copies. More finding a key followed by lonely, quiet backtracking.

The fourth level is of sewers and a water treatment styled facility. A bit under detailed and simple in construction.
The layout is more linear than the previous levels, but the upside is there's no tedious backtracking.

The secret level is accessed in a water tunnel after the storage tank room. This is one of the most eyesore crazy textured levels out there, but the architecture is interesting. It's one of the funnest for this episode as far as combat challenge is concerned.

The final level consists of a central hub with locked doors radiating around it like spokes. Each area is explored to gain the key for the next hub spoke. The first three are based on the same principle of following a linear series of rooms and corridors until a circular chamber is reached where there's a heavy fire fight with a mix of baddies.
Once the room is cleared out enough the switches can be thrown to get the key.
The last spoke is a descending staircase where the player is overloaded with ammo and has to unceremoniously fall down a well where the big boss and his brother are hanging out in a hellish like cavern.
Each spoke has its own atmosphere; one is of high tech EDF base style, the second is of an old wood based castle, the third is a stone based castle, and the last is along the lines of a cultist temple pit of evil. 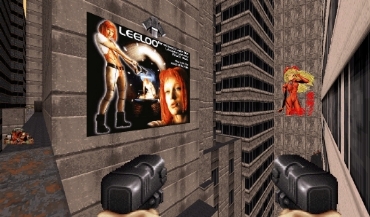 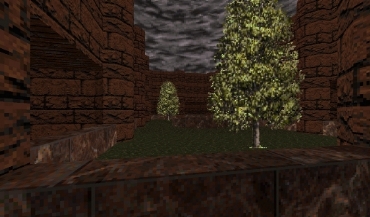 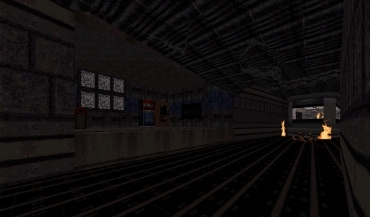 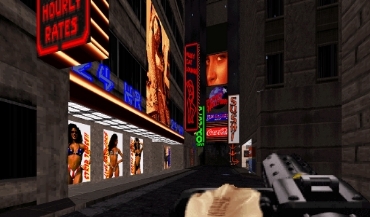 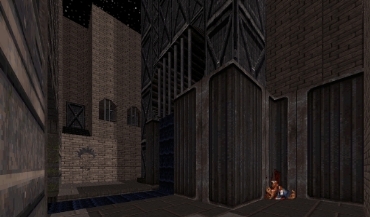 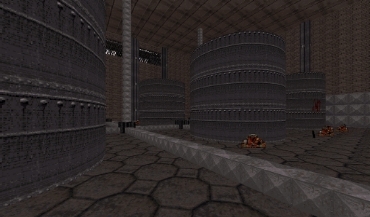