A monastery styled three map short episode. The story line premise is something along the lines of aliens twisting the minds of the resident monks and influencing them to sexual and satanic rituals in order to distract them so the aliens can take over their building to use it as a base. A good portion of the detailing and sprite work is used to make explicit material; some people might find the sexual representations and anti-christian messages offensive, I found them quite silly. There's a couple sections loaded with blood and gore; most of those are pretty neat, especially when combined with lighting effects.

The start-off map consists primarily of a courtyard and a hallway lined with several rooms. The objective is to search each cell and find a switch or button that opens a series of panels in a wall of one of the first rooms along the main passage. This is one of those maps where the author thinks slapping in as much spritework as possible equals good detailing. Not really, but it does hide several of the buttons effectively. Aside from this over the top decorating, there are a couple rooms that are actually nicely done and well-constructed. Probably the worst button is one behind a destructible wall panel since there's no real clue that the panel can be blown-up other than there has to be an activator somewhere in that room.

The second map continues where the first left off, but now the monastery shows signs of battle and destruction with half collapsed rooms, debris blocked passages, and other structures in a damaged state. The same silly sex and satan theme still persists, but the architecture is more prominent than sprite work clutter. The objective in this level is to find a couple key cards, make it to the chapel, and then access the lower levels below the monastery.

The final level forgoes most of the explicit decorations and sticks to being a maze of catacomb passages and caves. The mission is to find a key and get to the main chamber where the leader is holed-up. It's not very easy getting around in this cacophony of intertwining and cross-connecting series of corridors and tunnels. Add in that it's very stingy with healing items until the end so surviving through it can get more challenging than the actual last battle. 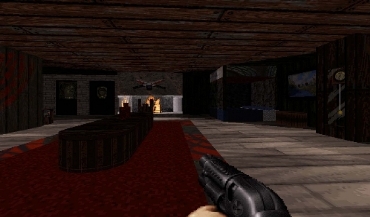 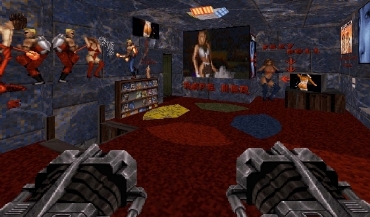 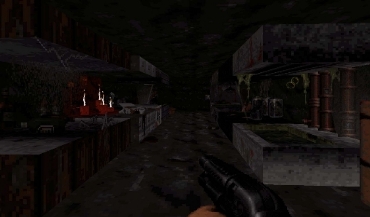 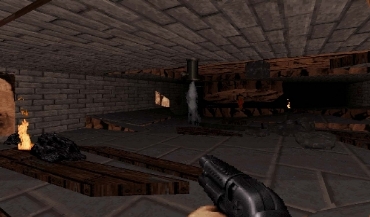 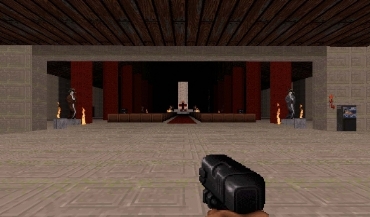 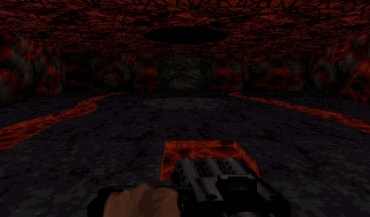