An EDF canyon base. The player needs to traverse through caves, amongst canyon walls, and over cliff faces and rock outcroppings before finally entering the base facility.
The layout is fairly linear, but with the constant changeup in scenery the player feels a sense of progression and accomplishment. The level is well design and constructed with definitive and prominent architecture and detailing. Visually the texturing is spot on, but the shading is pretty weak. A good portion of the level is absent of strong wall shading which makes areas look washed out, and the sector shading is hit or miss from room to room.

Game play is a key hunt. The cards are easily found, but require a little exploring to find them. The only downside to the floorplan design is some of the cliff faces. Earlier in the level the player is allowed to jump around from outcropping to outcropping, but a little later there are more rock platforms that look deceptively reachable, but getting to them isn't allowed resulting in a long splattering fall. Save before you experiment.
Enemy placement for most of the outdoor sections of the map are set up in sniper fashion with the aliens up on rocks and spurs shooting down at the player from multiple directions. A few forces down at ground level also keep the player busy, so expect quite a bit of pistol fire exchange to knock the distant ones off their perches while shotgunning the ones in your face.
In the base there are two cards; one to get to the end and one to get some supplies. The supply key is highly recommended, but not necessary. Combat in the facility is a bit more traditional face to face shootouts except in the main chamber where the pace picks up because the player has to stay on the move to avoid rockets until the inner sanctum can be reached. 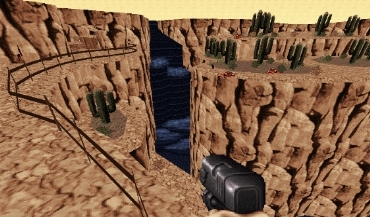 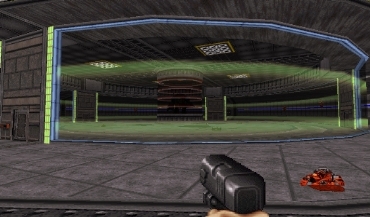 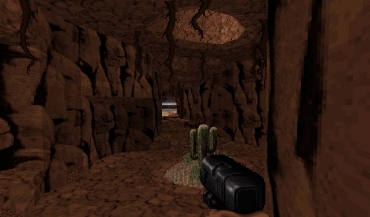 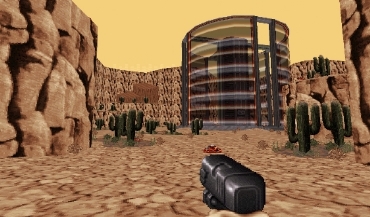 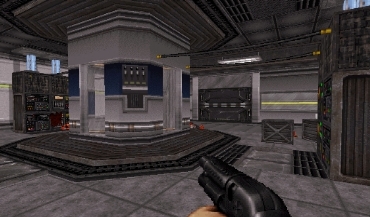 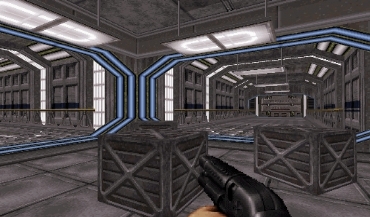