A cool level from the famous map FAQ author back in the days it is.

The authors words:
This is the new version of E4M6, a DOOM to Duke conversion level! A ton of stuff has changed, both from the original level in DOOM, and the last version of this level from Duke!

For players familiar with the mentioned DOOM level you would get a grasp of what this level is about.
For the rest of us: This level is partially fantasy and partially industrial type of environment.
Find a few keys unlock a few "bridges" to new areas and proceed. As you might know; Those alien scumbags aren't that pleased about your presence!
Design is cool with a dark ambiance. Dunno about this weapon / ammo thing......there is enough power-ups to serve the North Korean army scattered around the level. But it is a funny and entertaining level you shouldn't miss out!

Pretty much an ooze flooded fortress with a rather haphazard layout. The atmosphere is well done, with some nice texture combinations and strong shading.
The architecture is pretty solid, it's decently detailed, and there are a few sound effects to add to the ambience. It's a very immersive level, just a very difficult one to figure out and live through.
It's pretty much an open floor, except for the three barred-off platforms that require keys. Add in some masked walls, invisible switches, being able to jump around and platform to advanced locations, and several hidden doorways; it all adds up to wandering around with no sense of progression.
Now dump in some mini-battlelords and a ton of pigcops with very little firepower and limited ammunition. It can get pretty hectic.
There's one RPG that can be acquired, but you have to find the right hidden passage, and sneak in behind a mini-battlelord in order to grab it. Otherwise you'll end up trying to lure several battlelord sentries into the main ooze pit with the hope of avoiding them, and if they all don't fully cooperate, it can make the map near impossible to finish. Also fighting off the droves of pigcops and a dozen or so fat commanders with a shotgun and limited ammo is another tedious and almost pointless exercise. The map is tough, but do-able. Save a lot.
More fun than kissing a porcupine. 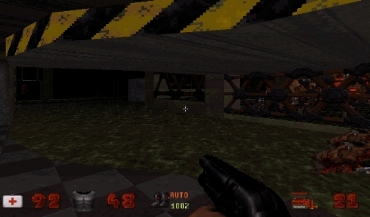 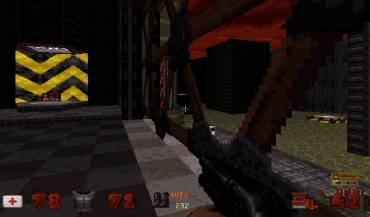 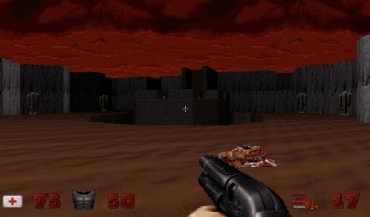 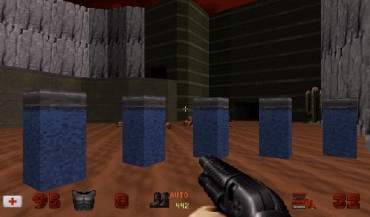 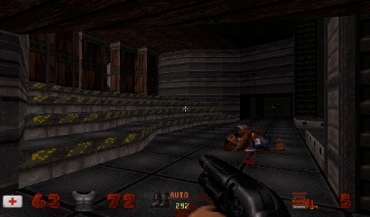 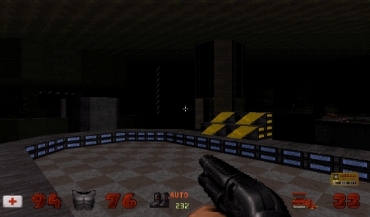