A city styled map.
The basic layout is three open plazas divided by two subway lines. The atmosphere is decent with some shading, detailing, and effects, but there are huge flat walls of a single texture that could have used a bit of trimwork and alteration to break up the monotony.
A couple of the plazas are also quite devoid of any detailing or architectural structures which makes those areas that much more empty and simplistic.
The layout is a maze of rooms with several interconnections via teleporter pad. Using these pads to get around can be a bit confusing since there are so many of them, but they can be avoided once the jetpack is found and can be used to get to those upper rooms with windows.

Game play consists of finding keys and clearing out rooms full of aliens.
Blasting the tons of aliens is the easy part; the player is stacked with weapons, ammunition, and atomic health.
Finding the keys is boggling and frustrating at best. The blue key is hidden behind a bookcase. Somewhere in the map is a touchplate that opens it so the player has to wander around exploring the entire map and checking back occasionally to see if they have access yet. The red and yellow cards are hidden behind unmarked walls and there are absolutely no clues to indicate their locations. Use the blue key and start randomly pressing use on walls around the lock to get the yellow key. Use the yellow key and watch random walls as the unlocked door threshold is crossed. Look for a section of wall that opens, but pay attention because it slams shut pretty fast. 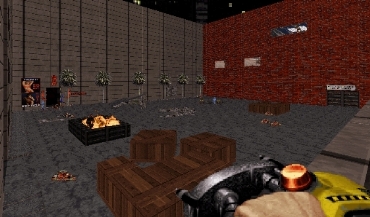 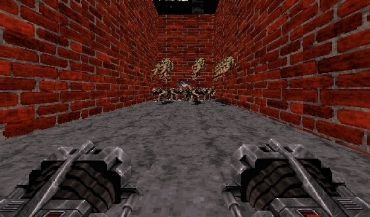 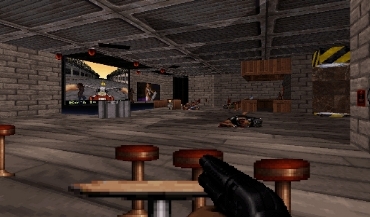 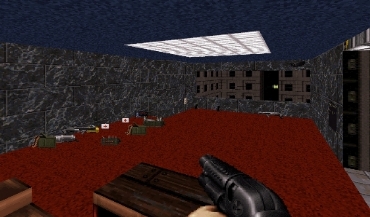 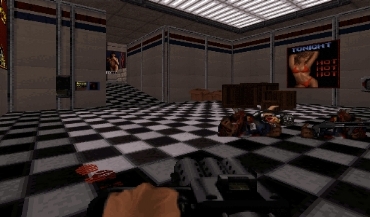 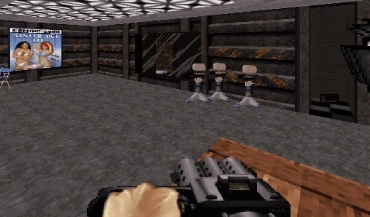