A city map that consists mainly of a street, a night club, a back alley, an alien infested apartment, and a bank.
Polymer and HRP are recommended in this updated version, but not required. The one issue being that this is a night time map and everything is dark without the polymer lights. Very dark. I suggest finding the older version if you wish to play it without polymer instead of using the console command to shut off the lighting.
Construction and design are pretty simplistic. Architecture and sprite constructions are squared off and blocky, detailing and trimwork are minimal, and texturing is pretty basic and misaligned in several spots. The level depends heavily on the darkness and lighting effects to create its atmosphere and that can only carry so much of the burden.
The layout is a double hub. The player must wander in and out of locations placed around the street and alley until they can enter the bank. Then the foyer and hallway act as the central location while rooms are explored.

Game play is a key card hunt.
The straight in - straight out design of the layout makes it easy to find the locks and keys, it's merely a matter of killing everything in your path to get there and back again. The level does rely on the jetpack to complete it, so keep an eye towards the sky to look for places that need exploring.
There is one unobvious puzzle in the bank that requires a pipebomb, but they're supplied nearby and it only becomes a matter of figuring out what needs to be done when there are no other options.

Combat is pretty constant and consistent creating a smooth flow in the action. Even during instances of backtracking the combat maintains a steady pace, though there are ways to avoid the respawns if you want to make it easy on yourself.
Only the basic weaponry is supplied, but that's all that's really needed, and there are evenly spaced stashes of ammo and healing items to keep the player loaded up on bullets and hitpoints. 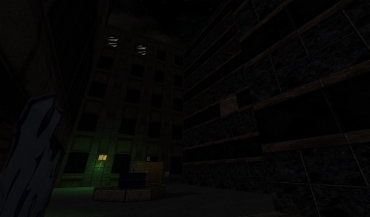