It also has some polymer lights, but my machine couldn't handle it. The map has large open outdoor areas full of sprites and models, and the lag made it unplayable. HRP is actually optional, not mandatory, since the level can be finished without using it. Not using it only causes a few issues, mostly related to sprite alignment and sizing, which are preferable to the hit fps takes if your machine and video card are a bit on the weak side.

The map encompasses a small section of a town right outside the gate of a military missile base, with the main portion of the level consisting of the base itself.
The level is huge and loaded with details, models, and sprites. There are a multitude of buildings; a bar, gas station, post office, maintenance garage, flight hanger, missile silo, control rooms, power stations, offices, a radio station, and much more. A large number of the buildings are multi-storied, and some have roof access as well, so this makes for many tiers and layers for the player to navigate.
The only area the map falls short in is the weak shading, but the texturing combinations help offset that a bit.
The theme is a keycard and key-lock hunt. Being that the map is huge and open, there's no order in which to explore things, thus the player must wander around until a yellow key is found, then the yellow lock is found. Repeat this process with the blue key and lock, then once again while inside the missile silo with the red key and lock.
There are a ton of supplies for the almost constant fire fights, and while dukeplus boosts to the player attributes, the aliens also have additional damaging attacks.
To complicate matters while running around outside, there are a couple turrets and a wandering tank firing occasional rockets at the player. It's just one more to watch out for while exploring.
The most annoying parts are the unpredictable deadly booby traps that can only be avoided with proper advanced knowledge. The player won't have this knowledge unless they've played it before, so it's pretty easy to get dead in this map. Save often. Do I want to be squished or blown up? Eff it, let's do both. 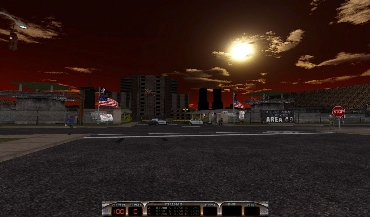 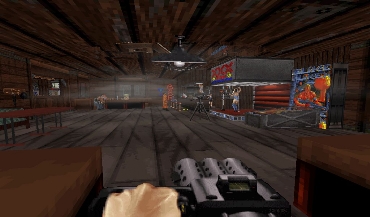 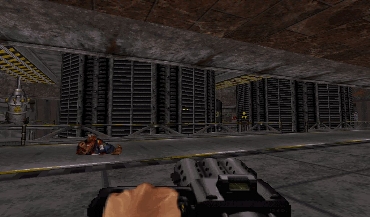 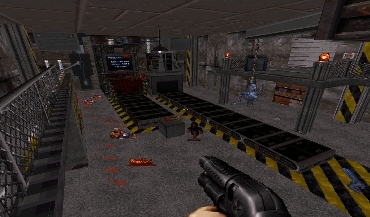