An old abandoned building in the middle of a slum that's been taken over by aliens.

This is a pretty straight forward map; the path is nearly a straight shot from start to finish.
Aside from one key card, it's primarily just a series of switches that unlock doors, and a lot of in-your-face bullet exchanges with aliens.
It's pretty tough; the player starts with the minimum pistol and ammo, eats some explosions to lower their hit points, then has to face down a few enemies in a hallway right outside the hover-copter they're in. Duke will get a weapon upgrade and a bit of ammo fairly quickly, but it's still an uphill battle for most of the map. Ammo and health are pretty scarce, aliens aren't.
There are a few quirks and annoyances along the way which mostly have to do with touchplates. A couple of them set off unannounced explosions for no apparent reason and take away precious health. Another is an touchplate that unlocks a room way back by the hover-copter that give the player an RPG - which they need to get through a wall crack.
The player has to understand and interpret the series of cameras from the view-screen in the room where this unremarkable trigger occurs in order to grasp what they need to do, and where to go, to get the needed explosive weapon.
That's if the player even bothers to look at the viewscreen. They could end up wandering aimlessly until they happen upon it, or accidentally find the semi-obscure alternate path that ends in a hidden door opening into the RPG room. Either way it's a bit of a sketchy set-up for something that's needed to progress.
The last bit of pain involves the one and only key card. It's well hidden. Very well hidden. Behind an almost indiscernible dark wooden panel located in the corner of a dark room.
Construction and detailing are a bit simplistic, and some of the texturing is a bit sloppy, but overall, the atmosphere is done fairly well. It's dark, dank, and gloomy, and the texture set fits the ambiance.
Ramps, lifts, and plenty of twists and turns in the path give the impression of a larger map than what it is and also a sense of progression.
More fun than mildew. 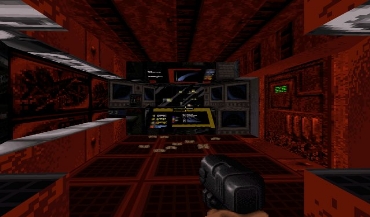 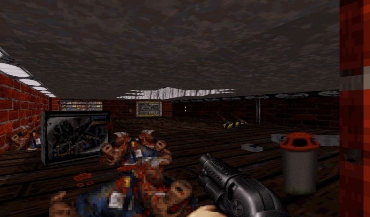 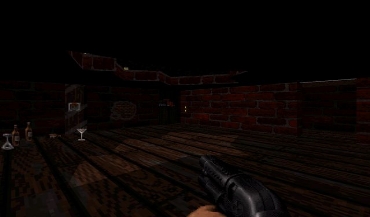 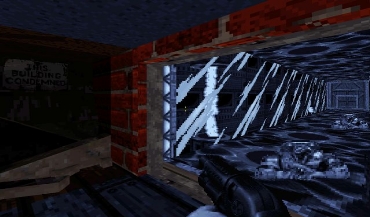 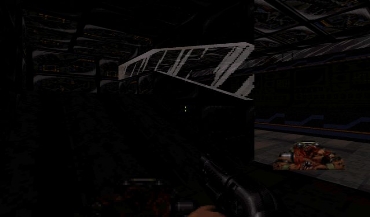 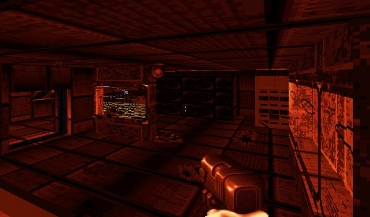