The Author of this level seems to have quite a vast Build portfolio with lots of released maps, but in his own words, they were mostly Doom or Mario Kart remakes. I believe this one is his first shot at more ambitious design - and quite a well-executed one.

The level starts with a familiar sequence of alien's shooting up Duke's ride - this time pimped-up with the falling aircraft also damaging the large alien vessel. It seems that the aliens are targeting an abandoned government building, so Duke has to get rid of them as usual. The level includes the alien ship and a large, mazy building, along with some additional terrain around it.

The ship's design is your classic green alien stuff, with some clever multilevel compartments and an alien's mission log inside. The Author recommends you to visit it before tackling the building, and although it doesn't really serve any key purpose required to proceed, Duke will find some starter pack consisting of weapons and goodies here.

Most of the level will be spent inside a large, single level building (and it's very ill maintained basement). While the building's architecture certainly does remind a typical boring government building, sometimes it feels like the Author has pushed this feeling too far, with a lot of repetitive, copy-pasted rooms that barely serve any purpose and are usually somehow hastily detailed with one sprite copied and scattered around (although one of the rooms contains a really cool looking spritework keyboard, which is a real treat!). The corridors seem a bit cramped and too tight. Extensively used swing doors lack the closing sound. Furthermore, there is an ongoing alarm sound that cannot be switched off and becomes really frustrating for a longer time (on the other hand, it can be quite useful for navigation of the basement).

The basement is a maze of pipes and boxes, filled with green acid (although the distribution of protective boots around the area is pretty fair and getting hurt is not something that should occur). There are some nicely designed elements in here too, but overall this area also suffers from repetitiveness and seems a bit too dark. Its layout feels a bit confusing.

There is plenty of enemies (about 140), but besides the first encounters, the fights tend to be quite dull. It feels that too many enemies inside the building were stayput, which means they wouldn't leave the boundaries of their sector - which makes killing them a bit like shooting sitting ducks. This is especially evident in 2 large rooms which hold about 25 Pig Cops each - in most cases, they will just all gather at the door and be very easy to dodge and clear with just a couple of explosives. There is only one real puzzle to solve, but it might be quite difficult (especially with Polymost renderer, as the hidden hint message seems to be impossible to spot in this case).

There is a lot of viewscreen messages, which give the map a stronger than usual sense of mission. Furthermore, there's also a really cool looking rotated plan of the building that can be seen on one of the information screens - be sure not to miss it! Some road and terrain forming on the outside looks very impressive, especially the elaborate pedestrian bridge - it's too bad they are somehow "left out of action" and just sitting there in the corner, as the Author could have definitely found a better purpose for these elements. The boundaries of the player area seem somewhat not much thought of, as they give a feeling that we're in some kind of large box.

The map is also really huge in terms of engine resources used and file size - this is also due to some weird design choices, such as making sector-based parking lines in quite a shy area behind the building or creating the entire unreachable structure behind the road out of sprites for seemingly no particular reason. The layout of the building and basement make strong use of sector over sector, which is very seamless and applied flawlessly here.

Conclusion: Quite original concept and strong sense of mission make this level stand out. The design is good for the most part, with some impressive eye-candy stuff, but leaves the expectations quite short with its unevenness and repetition. Gameplay feels a bit flattened out and static with lack of respawning monsters or really challenging fights - but hey, we're just chillin' here! 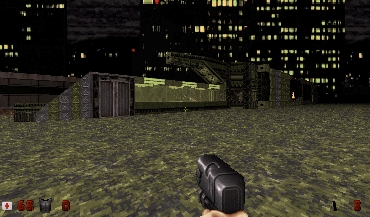 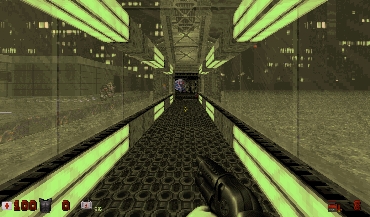 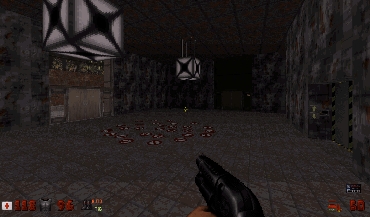 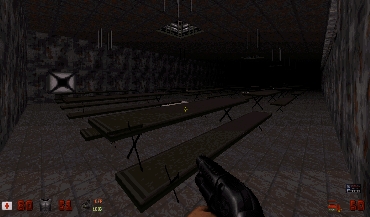 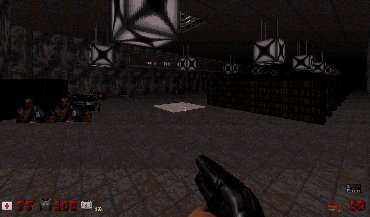 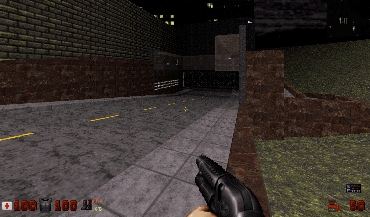