A city map.
There is a street section with a few alleys and a couple of apartments, but most of the map consists of subway lines and stations.
It's very well-constructed and detailed with a dirty urban environment. There's graffiti, wear and tear on the structures, and trash scattered all around.
A fair amount of vertical movement is provided with several lifts, ramps, and escalators to give the level a feeling of progression and a realistic environment. Ambiance is also provided with several effects and sounds to give the atmosphere a dynamic experience.
The layout consists of several interlocking loops and depending on which way the player chooses to go, backtracking can be kept to a minimum.

Game play is keys.
It's going to take some observations skills to manage getting through this map. There's a wall crack that needs to be detonated in order to get the blue key, the red key is along a subway line at a point where the cars don't make a stop so the player is going to have to notice it and hoof it back there on foot, and the yellow key is in an apartment behind a masked window and requires a jetpack to get to it. Of all that finding the yellow card is the worst of it since it's not very obvious exactly where this apartment is unless one pays extra attention to the viewscreens.
Combat is pretty unbalanced; even though ammunition is pretty stingy making fire fights challenging for a while, there are so many atomic health laying around that the player will probably never fall below one hundred fifty unless they're extremely careless. 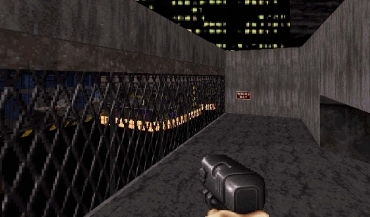 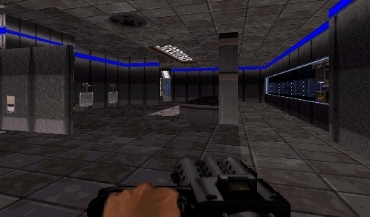 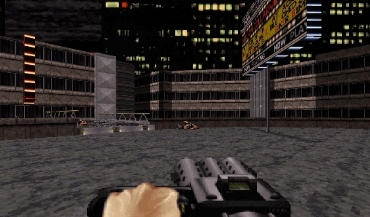 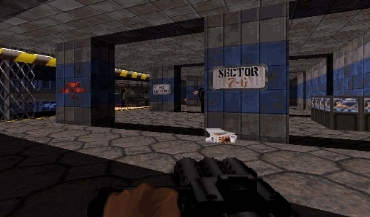 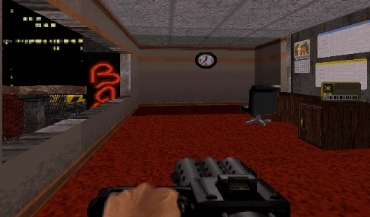