An industrial factory.
Construction wise the map is pretty solid with good architecture, trimwork, and detailing. The shading could have been a little better though; what shadows there are seem a bit at odds with the angles from potential light sources or just completely out of place.
The level has the usual factory stuff like cranes, control rooms, and storage rooms with crates, but it also has an interesting series of concentric spinning rooms and a set of conveyors that are controlled by the player. Getting around can be a little confusing at first because there are all kinds of little side passages, ventilation shafts, and wall cracks that jut off the main factory floor and dump the player back into it at a different point.
There's also a potential design issue that may be a cause of progress confusion. In one of the dark ventilation ducts the player is supposed to stand in the exact right spot and wait around for a bit until a crane grabs them and takes them to the roof. It's dark, it looks like a dead end, there's no indication that the player is supposed to wait on anything, and it has enough elbow room to move around a little so the crane might not even come if the player doesn't stand centered in the shaft and remain still.

Game play is solving puzzles to get keys.
Whether it's riding cranes, controlling belts, navigational challenges like getting out of the spinning rooms, throwing buttons and switches, or just blowing stuff up, the map is quite interactive and dynamic.
There is a yellow card hidden inside a crate that needs to be blown up, but the purpose of the key seems to be nothing more than a distraction to throw the player off track. It does open up an underwater tunnel, but other than wasting some ammunition on the enemies lurking around in that section it appears to serve no other purpose to level progression.
Combat is pretty tough at the beginning; the primary central room is occupied by some pretty stout and numerous aliens in relation to the fire power Duke is packing.
Healing items and ammunition are also pretty stingy at this point, but once that area is cleared and a couple extra weapons and some ammo are acquired, life gets a bit easier. Health items also start showing up in the satellite locations around this section if a little extra time is dedicated to exploring to find supplies. 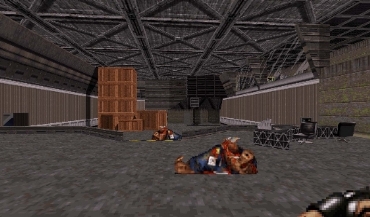 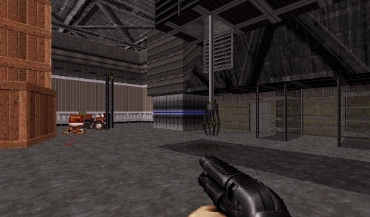 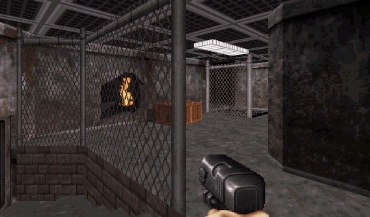 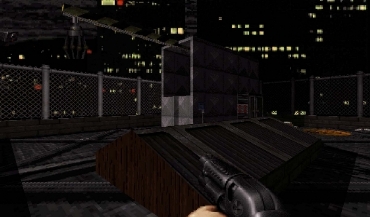 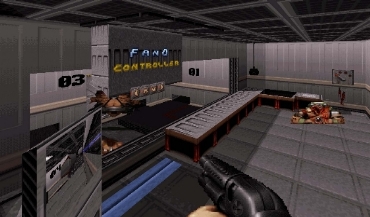 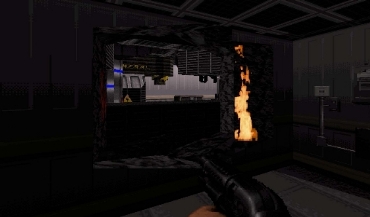