A medieval castle styled map.
The level is made up mostly of ramparts, spiral stairwells, small to medium sized rooms, battlements, corridors, and small court yards.
It is very well constructed with nice texture choices and combinations as well as good trimwork. The architecture is nothing over the top, but is very solid and some sprite constructions provide additional platforms to add to the range of the floorplan.
The map is minimally detailed in the fashion where less is better with the only downside being the map's indoor lighting is provided by fires as per a pre-electricity time period, so it's fairly easy to constantly get burned while walking around.
The lighting effects throughout and strong shading contrasts in the lower levels along with plenty of ambient sounds creates a nice atmosphere.
The layout is a crazy open maze where passages criss-cross, loop around, and constantly intersect each other. It's fairly easy to get lost or have difficulty trying to find one's way back to a certain location.

Game play is a key card hunt.
The keys and locks are in the open, but getting to them or trying to remember where that lock is located is easier said than done.
The map is such an open maze and the texture sets are limited so it makes most areas look pretty much alike. Don't be surprised if you stumble across a key and then spend quite a bit of time trying to recall where you last saw the lock.
One down side to such an open map is that it's quite easy to get to where you're not supposed to and make one of the keys unnecessary to complete the level.
Combat is initially very challenging. Weapons, ammunition, and healing items are scattered all over the map, but until you happen across some you're in for a beat down.
The aliens are everywhere and usually grouped in small clusters of like kinds. One room might be full of enforcers, then while trying to get away from them if you're not armed enough for the conflict, you may stumble into a dungeon full of octabrains. Bad luck that.
The level is supplied with a good number of weapons and life becomes a bit easier after collecting them. The challenge is taking the lucky path and finding them before the enemies find you. 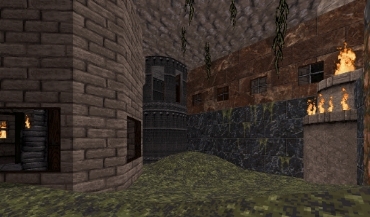 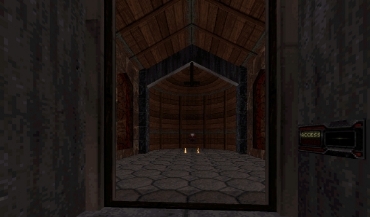 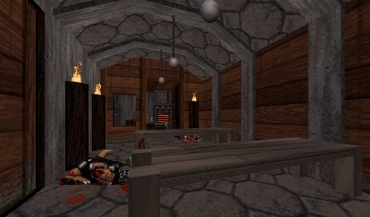 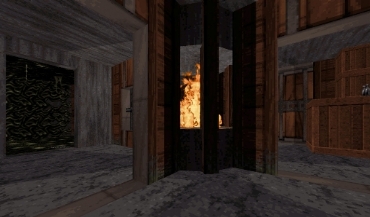 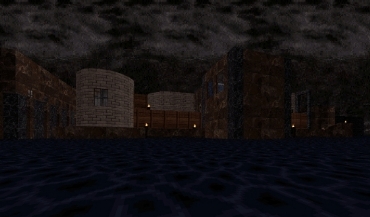 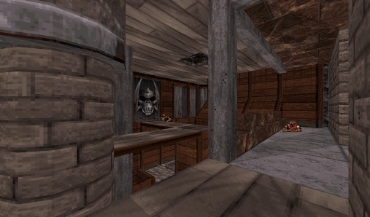