A combination of a hotel and a sports arena with apartments, a club, a fast food restaurant, a boxing ring, and a football field.
Aesthetically the level is hit and miss. Some locations are well detailed, well shaded, have nice texture combinations, and have good architecture. Other places have weird conflicting shadows or just no shading at all.
There are also some large flat wall decorations and big bulky furnishings in high flat ceiling rooms with flat untrimmed walls which really give the impression of over sizing.
The ambiance fluctuates from full bright to dark rooms with flashing light effects and the included additional music and sound files are going to test your personal taste.
The layout pretty much follows the premise of entering a large room or corridor, go into another smaller room right off the main large area to get a key, walk to the other end of the large room or corridor, and then use the key. Not much can happen to cause any confusion; it's a straight shot and either the player ends up at the lock or the key.

Game play is combat.
There are a few key cards, but don't let that get in the way of fighting room after room after room of dozens and dozens of aliens.
At first it's pretty difficult since the player is only armed with a pistol and limited bullets.
If the aliens are stingy with their ammo drops then it's quite easy to become unarmed and overwhelmed. If the player manages to survive long enough to find the shotgun then life becomes a bit easier since there are ample amounts of ammunition for that weapon lying around.
Combat then turns into standing in doorways while all the aliens try to crowd through the narrowed passage and shoot each other in the back while the player picks them off from the front. At some point the player is provided with an RPG so fire fights pretty much just turn into lobbing explosive rounds into rooms until nothing moves. 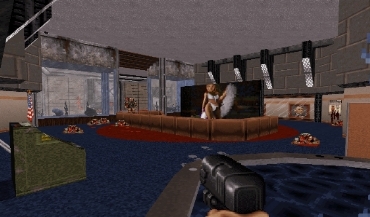 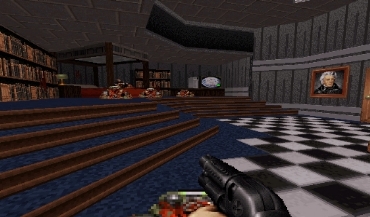 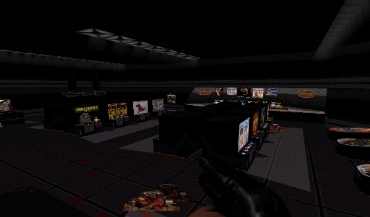 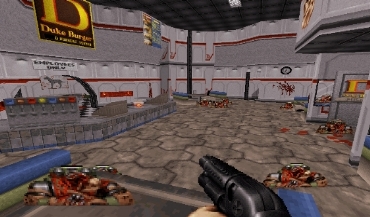 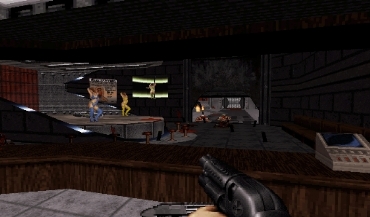 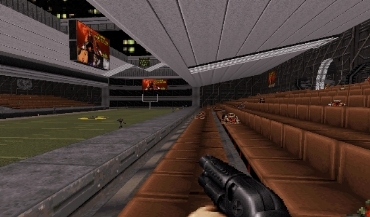