An EDF moonbase. The interior atmosphere is nicely done with nice strong lighting-shading contrast and well detailed out rooms.
The locations themselves are fairly typical; control rooms, storage rooms, computer consoles, and recreational facilities, but it also has several skylights and portals to see the exterior environment, and there is all kinds of damage from the alien's efforts to take over the base. The lunar surface is also solidly constructed, but using scuba gear to moon-walk kinda ruins the effect.
The layout is broken up into two major sections; the first consists of a series of rooms and corridors inside the base while the second is primarily a canyon and large crater on the moon's surface.

Game play is a key card hunt. The player must wander around the inside of the facility in an attempt to locate a few switches and keys in order to acquire the card necessary to open the space lock leading to the exterior portion of the level. The base is semi-open and has a few directions the player can chose from so it's nice for exploring around and doesn't feel too linear or confining.
Initially the map is pretty tough; there's a fair amount of ammunition and several weapons are collected relatively quickly, but unless a couple secrets are discovered, healing items are incredibly rare and stingy until the dining facility-recreation room is reached.
A good variety of well-placed aliens waiting to confront Duke head-on or ambush him from advantageous fighting positions will keep the player from running headlong into locations until those supplies can be attained. Afterwards the game leans a bit more towards the run-and-gun blasting away style. 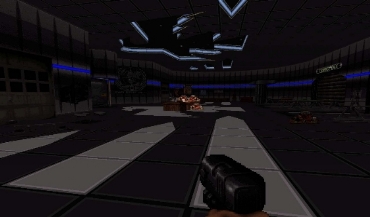 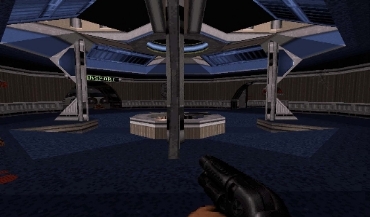 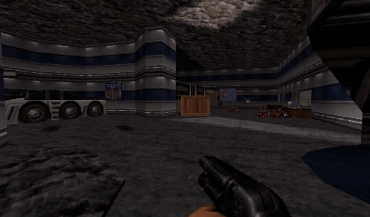 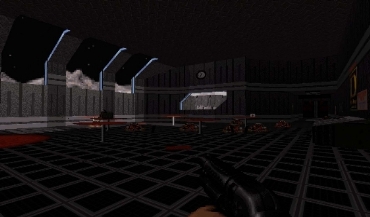 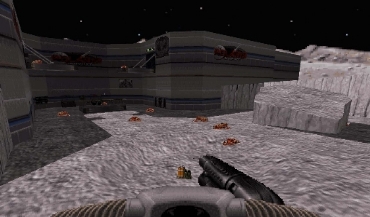 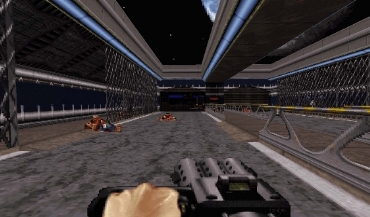