Another day, another city overrun by the alien hordes.
You start in an apartment, lightly armed, and as you look out the window, you not only get to enjoy some enemies trying to plug you full of holes, you get to enjoy an incredible view.
A well detailed street scene with articulate building architecture, realistically placed sprite work with the shrubbery, trees, street signs, etc., and wonderful shading, texturing, and trim work.
Initially a non-linear map; you collect a yellow key card and then it's entirely up to you which of the four locations: the pool hall, the restaurant, or one of the two unique office buildings, you want to explore.
Upon entering any one of the locations you'll discover that meticulous care was taken to create a realistic design and layout that completes the overall great atmosphere.
This high standard is continued on through the map from the plaza, to the grocery market, and on through the sewer all the way to the end.
However, having a wall of dogs staring at you is kinda creepy.

The aliens are strategically placed and are evenly matched against Duke's arsenal.
There are plenty of weapons, health, and ammunition available, but they are spread out through the map and must be sought out.
After exploring key locations, you'll encounter a few spawned aliens outside sent to keep you company as you deal with the mini-battlelords that are there to do a little chimney sweeping and maybe toss a few grenades at your head. This keeps the game fresh and challenging as you move around on the street.
One of the strategies to completing this map is ammunition management. Ammo dries up in the second half of the map and by the time you reach the end you're going to be close to running out, so switch weapons and use the most effective ones for the enemies you're facing.
There are a few secrets in the map and they definitely pay off if you find them.
The only problem you might come across is the final elevator at the end. At the top you must crouch to get through the grating hole and when you do, the elevator likes to go down. While you're moving from one location to the next collecting yellow key cards and you're feeling kinda lonely and "blue", be sure to "pet" all the dogs next to the view screens, they'll be happy to keep you company.
Score: 96 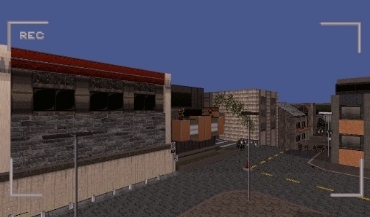