The landscape is expansive and vast, doubly so because not only are the distances long, the heights of the cliffs and depths of the canyons are large as well.
All this open and extensive terrain is just ripe for the exploring. It has it's advantages as well as drawbacks. Especially when the primary means of getting around is via jetpak.
In the beginning there's no real method to it, the objective is to find buttons, and not in any particular order. This lends to some replay value. The downside being that the player may run out of fuel and be unable to reach the stashes of jetpaks high up in the cliffs. Oops. Restart your game and pay more attention. Hope you didn't get too far.
Ammo and health are pretty scarce, so it's easy to get into trouble if the player hasn't found any items for awhile.
The terrain and huge distances do allow for escapes though. Just watch your back; especially during the frequent large spawn parties.
The second section is a small sea-side town. This is less jetpak involved, but the aliens are more congested and harder to avoid, while supplies are almost non-existent. Complete the island tower and find the switch puzzle to drop the gate to access the next section.
A deep gorge with a military base inside a mesa greets the player in the final leg of the journey. Lots of flying out over a deep drop. Find the keys and get out there. You can acquire a few more weapons and healing items in this section, but you have to live long enough to locate them.
Aesthetically the map is pretty good. It has nice terrain elevation variations, and the texturing is well done, but the vast distances between locations tends to make things look a little under detailed. Huge maps are also prone to lacking strong shading, as the allowed walls go towards primary architecture and structures instead of detailing sectors.
More fun than a Red Eye from New York To London. 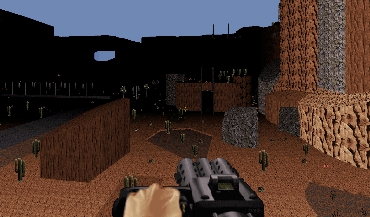 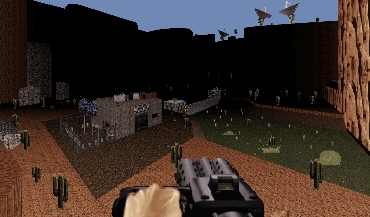 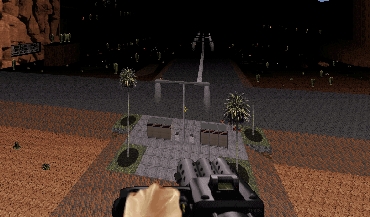 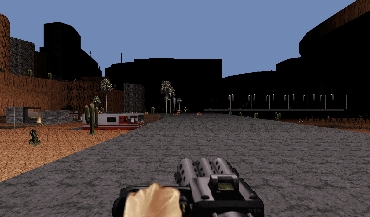 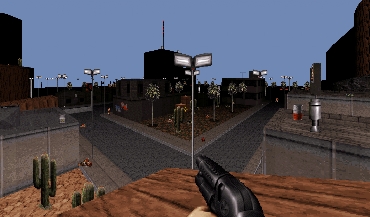 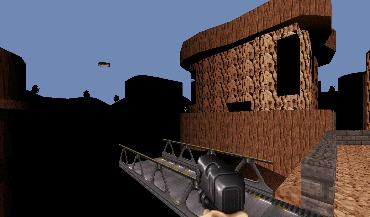