An eight-level episode it is.
Atomic Edition required, else it plays on most systems including Mac.

Downtown Journey is quite the epic new 8-level Duke Nukem 3D adventure by Brazilian author Preto Murara, marking his first public release despite two decades of Build mapping under his belt. Preto is such a purist he even used a classic Pentium with the original Build.exe to craft the whole package (no Mapster32 convenience and enhanced limits; also meaning that the set is fully compatible with Duke Nukem 3D 1.4+), a trait that can be retraced even in his mapping style at the core: clean, simple architecture and interconnected layouts very much in the tradition of the original episodes, with some creative twists here and there that only rarely feel out of place.

As the title implies, your whole journey as Duke will be of the urban kind, with a feel somewhat reminiscent of popular community add-on Metropolitan Mayhem. Spoiling every level individually and thus the sense of progression would be a shame, but it can still be said that every single one of them bears a strong sense of location (some more than others) and successfully pulls off specific themes or concepts that have only rarely been tackled in Duke, all the while never really falling into the gimmicky.

Some of that experimentation turned out for the best and some for the worst, though; for instance there is one train level that looks magnificent, yet is completely unpractical to navigate due to the amount of decorative sprites cluttering the player space. Or, also, a hotel map in which extensive use of the jetpack is required, but what's always an interesting concept falls flat here due to the scarcity of the item, making for a good chance that Duke's ride might softlock.
A few of the levels also use too many decorative doors, in-your-back respawns and at least a pair is way too dark (especially if you don't play in Classic mode as intended). A handful of keys and puzzles might feel a bit mean, too.

What's good is really good, though. The entire adventure feels almost canonic due to how much respect was given to the traditional style with each map, be it in terms of clean looks, straightforward and coherent storywriting, and science in the layouts and transitions from level to level.
The author really only took liberties when it comes to picking new themes (for instance, a bus station or a mall), experimenting with concepts (that jetpack level) or enhancing visuals - not counting that train level, sprite work has been put to excellent use everywhere to simulate both small objects and entire floors depending on the settings, and it always looks really clean all the while usually consisting in uncommon tile picks.
A lot of the maps are littered with singular instances of smart constructions, small or big, and the result only complements the classic tone instead of clashing with it. The mall level is an especially great representation of that, in addition to being a fantastic map altogether.

In the end, Downtown Journey is an instant classic, and another sweet reminder that sometimes simple is best. It has its own quirks and flaws, but also its strengths and then some more when you count those directly inherited from the greatness of the original game design, which it certainly doesn't shun.
The quality of its attempt at looking and feeling professional all the while comprising some nice bouts of creativity definitely justifies its place in your Duke 3D directory. 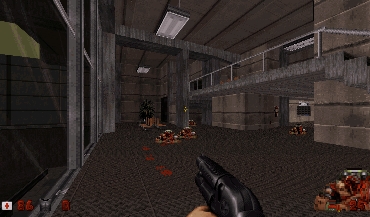 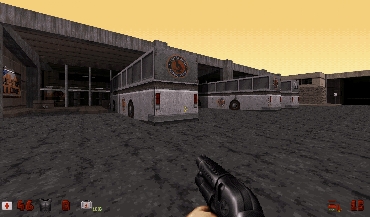