A recreation of the Duke 64 version of the game from the Nintendo 64 console.
The first three complete episodes are included with the fourth being a dukematch series of maps. The maps are done with painstaking accuracy to match the console game, and aside from the art, the levels are pretty much the same as Duke3D, but there are notable differences. Deviations can be as subtle as changed texture sets, the placement of a switch, or a slight re-arrangement of a room; to the completely obvious major room layout transformations, added sections, or sections completely removed and replaced with something different.
If you're familiar with Duke3D, but haven't played the Nintendo version it's almost like playing a new game with a familiar layout; paths have been moved or modified, secrets vary, switches are moved or in some cases removed, a different weapon set to familiarize yourself with, babes are to be rescued instead of ignored or blown up, instead of ending at the completion of an episode the game continues into the next with Duke keeping his supplies and weaponry, and there's a new set of art and sprites tiles used to alter the detailing and scenery.
There are some weird architectural glitches throughout the episodes, like doors that disappear when opened, and weird crossing sector lines visual clipping issues. I don't know if these are original to the game, but accurate recreation for the sake of accuracy could take a back seat in some instances.
*Spoiler* A nasty trick is to play the dukematch levels first. The levels have exit switches and eventually cycle into E1L1 of the first episode after three or four DM maps then continue on into the episode as if you just began a new game. You can essentially start the game with a full complement of weapons, ammo, supplies, and 200 health point.

The game has been censored to make it more "pc". Whose version of pc is left to be questioned. The babes are fully clothed and the hookers and strippers no longer have "racy" sound bites when spoken to, but some of the posters have been replaced with other women still clad in swimwear and a video clip of the stripper with buttfloss lingerie has been amended; she's holding a pistol, so now it's okay. The mangled Luke Skywalker has been replaced with a mangled Yoda, the dead dolphin has been substituted by a half of a human body with a meat hook through its head, and the pod babe hanging from the ceiling has been replaced by a woman torn in half with her spine hanging out in all its gory glory. Replacing sex with violence is so much better on a child's psyche.

The arsenal, like the levels, is generally the same but with different art and quirks.
The pistol, shotgun, and rocket launcher have alternate ammunition; the first two have high explosive rounds making them more powerful while the rocket launcher has heat seeking missiles. The freezer has been replaced with a plasma cannon that can be charged up by holding the fire button down and releasing a devastating explosive beam of energy.
Of course if you're hit by an alien while charging up the weapon won't fire and you'll lose the ammunition count.
The shrinker and expander behave similar to the Duke3D version except the ammo capacity has increased which make them more useful, but the enemies killed by the expander just jib instead of creating a small explosion.
The chaingun has been replaced by duel SMGs with an increased ammo capacity, but this weapon is incredibly weak and inaccurate. So much so it's nearly worthless since it takes large amounts of ammo to kill anything. It should be used to get rid of pesky enemies like sharks, eggs, and slimers, or as a last resort weapon in extreme close range combat.
There are some bugs that the player should be aware of. The pistol will randomly change to another weapon instead of reloading no matter how much ammo you have. If you've used the shotgun with normal ammunition, switch from it, then switch back, it will randomly change to use the explosive rounds. If you don't pay attention and shoot something up close you'll get scuffed up from the splash damage. The grenade launcher has a flat trajectory underwater; failing to compensate your aim could end up with you eating your own grenade. They also don't fire very well while floating over submersible water; without aiming at an extreme angle the projectile will more times than not just disappear under the surface.
Also the grenades seem to have problems crossing an occasional sector line; they just hit an "invisible" wall and explode.
Most annoying is that Duke sometimes decides not to pick up ammunition. You could be completely out of rounds and dance over a case of bullets and he just refuses to pick them up.

If you're familiar with the original Duke3D episodes it's interesting to compare the differences, or if you've played the console version it's a nice revisit for the sake of nostalgia. 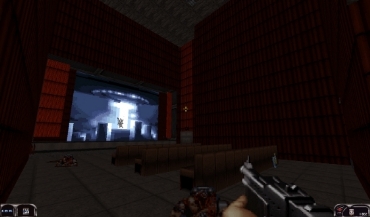 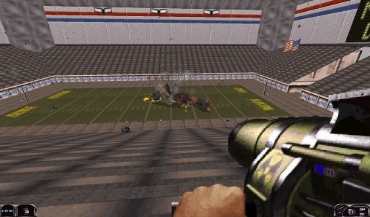 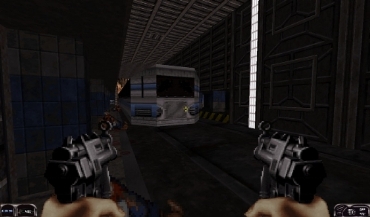 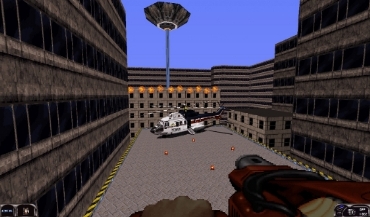 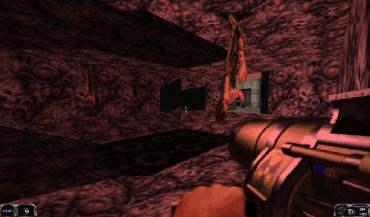