A Christmas themed map consisting of a couple snow covered valleys interconnected via icy caves. In each valley there's a log cabin styled structure.
The first, where Duke starts out, looks like an old abandoned ice house that's pretty run down and all boarded up.
The second building is someone's home all decorated out for the holidays. Each vale is surrounded by frozen cliff walls, loaded with frosty pine trees, and is tiered with rock outcroppings and small nooks in the canyon walls.
Construction wise it's pretty solid with nice architectural structuring, a fair amount of sprite work and detailing, is well trimmed out, and has nice texture combinations.
Aesthetically the only nitpicks are that it could have used stronger shading contrasts and some of the explosion effects were pretty weak and minimalistic.

The object is to collect a couple keys in order to reach the alien's control center and use their equipment to call in Evil Santa.
Other than a few wall crack puzzles game play is primarily based on a constant flow of combat. Consistency is maintained with several respawns during the few instances of backtracking so there's hardly ever a lull in the action.
Weapons, supplies, and healing items are strategically placed so the player collects them right before the major conflicts when they're needed the most.
A bug in the game involves shooting the fat snowman commanders with the freezer; not a good idea since they can't be harmed afterwards. 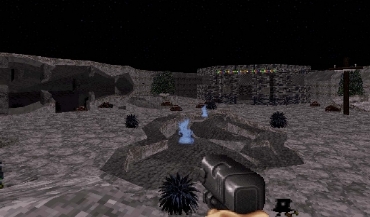 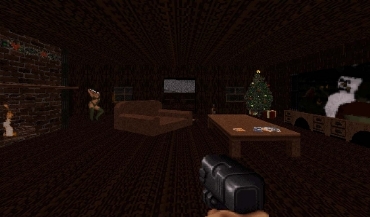 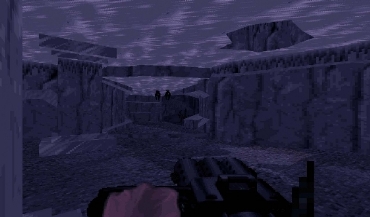 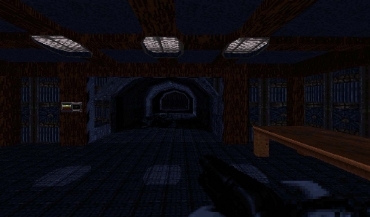 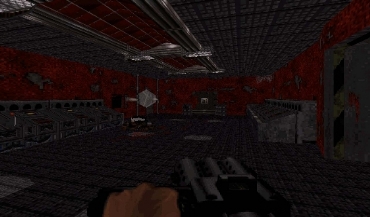