A city styled map that is basically slightly modified versions of E1L1, E1L2 and E3L9 linked together in one continuous level.
The changes and adjustments are pretty subtle and are basically the same as the original, so the map is rated for the creativity of how the levels are connected and used. The player starts on the rooftop in E1L1 and moves through it as normal, but instead of taking an elevator to get to E1L2 a building is partly destroyed making a tunnel to enter that map in basically the same location as the original. E1L2 is again played in the identical way as the unmodified version except at the end; instead of being taken prisoner and put in an electric chair the player is teleported to the edge of the football field in E3L9. There the map ends with a big boss fight as normal.

This level is specifically designed to be a co-op played map. The author designed it in such a way as to make it "impossible" to complete in single-player mode without cheating. There are two specific locations where these built in "fail-safes" are to prevent a single person from being able to progress. From the start of the map the drop down the ventilation shaft from the roof top is fatal and no jetpack is provided. The premise is that one player will sacrifice themself by going first and the other players can survive by following and landing on the first player's head. This can be bypassed if a single player can get a slimer or mechanical mouse to drop down the shaft in front of them.
The second location is the sewer in E1L2. The tunnel is packed wall to wall with enemies, and due to the lack of an adequate amount of pipebombs, the premise is that each player will drop down the manhole and sacrifice themselves by using explosive weapons until enough of the enemies are dead and it's possible to get down there and clear the rest of the area out. Due to a design flaw a single player can drop down the hole and jet pack back to the top the instant they hit bottom. Something about the way the map was created causes a portion of the aliens near the bottom of the manhole to teleport back up with the player. Thus a single player can drop down, jetpack up, kill the aliens that also came up, and repeat until the area is clear enough to safely land without getting insta-dead.

As in the original levels there are keycards and locks, but this is more about fighting and surviving.
Just about every room and around every street corner are raging hordes of aliens jammed in shoulder to shoulder, wall to wall, and from floor to sky or ceiling. The numbers are completely ridiculous and I don't see how one Duke or even twenty Dukes can face them all down at the same time. The best strategy is to slowly peek around a corner and draw in a manageable portion of them. This can get quite tedious and progression is done in inches instead of by room. To further exasperate the situation there are also raging hordes of mechanical mice. In addition to the annoying sounds they make it's also quite dangerous to use heavy artillery when they're nearby. It never fails that one will decide to walk in front of you when using an RPG. The initial portion of the map must have been designed with a "survival of the fittest" competition in mind. Even with the Duff balloon, supplies in the E1L1 section are pretty skimpy; especially health items, but if you employ sniper tactics instead of trying to face off head-on against a small army it's do-able. The following two map sections have huge stashes and several supplemental Duff balloons to accommodate multiple players which is way more than enough for a person attempting a solo run at it. 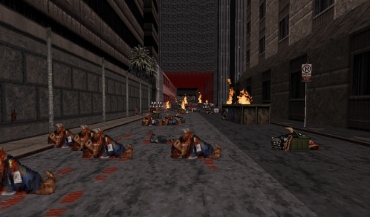 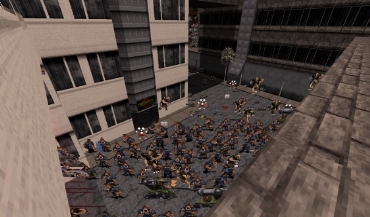