An office building. There are several windows and a hole or two in some walls to provide a view outside, but the player never leaves the building.
Regardless, the scenery is pretty well detailed and changes up enough to keep things from getting dull by providing various locations like cubicles, a conference room, security checkpoints, records and filing rooms, large and small offices, computer mainframes, and a series of ventilation shafts.
By providing multiple staircases and changes in elevation it also keeps the surroundings from feeling too flat or linear.
The majority of it is fairly dim with various sources of light providing a bit of visibility, be it from ambient light coming in through windows or just some minimal fire lights in the ceiling, they provide good lighting and shading contrasts.
The environment is supposed to be an empty and quiet office building, but a greater amount of ambient sounds could have helped make the atmosphere tenser.

Game play is a card hunt.
Initially the layout is linear and requires going from room to room while ducking through some vent shafts. After the blue key is used a few gates open up and provide a couple of options on which path to take to get to where the player needs to go for the next card.
Probably the hardest part of the level is remembering where the red lock is since the map is quite open by that point.
The weapon selection is very limited and ammunition and healing items are spread out thinly through the level, but there should be just enough to get by on comfortably. 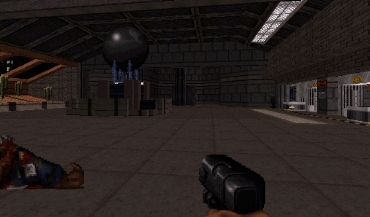 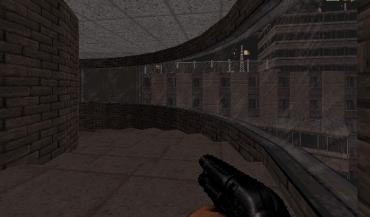 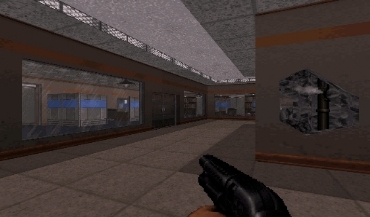 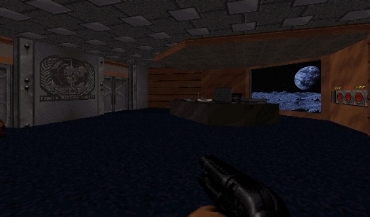 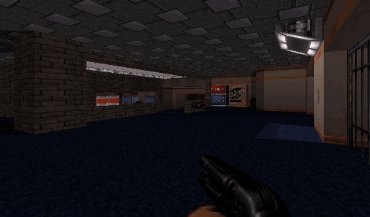 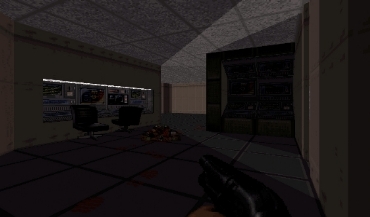