A nuclear power plant facility.
The indoor sections are pretty typical; mainly control and storage rooms. The exterior consists of a small canyon with the cooling towers, some caves, and a shipping port.
The inside of the structure is pretty simple and mundane with basic architectural structures and squared off rooms, flat detailing, and trimwork pretty much exclusively along the ceiling.
While not incredible the outdoor cliffs and caves are well done, and the shading is decent throughout.
There is a design flaw: a couple switches in the interior of the power plant's cooling towers are supposed to lower or blow up some cliff walls in the outdoor area around the exterior of the towers which allows the player access to the port docks.
The author put in the activators, but failed to include any effectors. Luckily messy wall blocking allows the player to jump from one cliff to another and get across.
The downside being that the entire section with underground caves to collect a key and the area inside the towers are completely pointless and can be bypassed.
The layout is a series of mini hubs usually following the formula of going down one branch to get a key, returning to the room acting as a hub, then going down another branch to use the key.

Game play is a key card hunt.
The keys and locks are easily found and not far apart; maybe two or three rooms seperating them at most. Expect some short back tracking action because this map is loaded with enemies.
Fire fights are mainly composed of engaging large clusters of mixed aliens positioned in most major rooms and junctures. Once the room is cleared and the task in that area is completed another cluster of antagonists are waiting for the player's return trip.
There are also instances of baddies popping up for surprise ambushes in the large outdoor section around the towers. Just when the player thinks they're about to finish there's one more large engagement to overcome, but optionally the player can make a mad dash for the exit.
There's an adequate arsenal to handle the enemies, and a fair amount of health and ammo to get through all the fire fights. 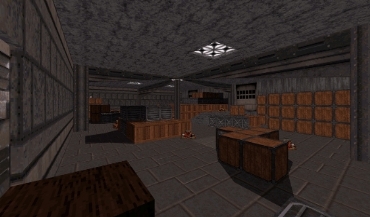 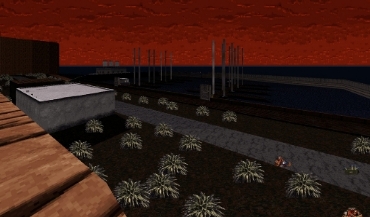 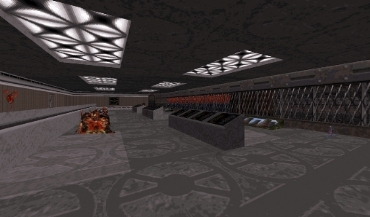 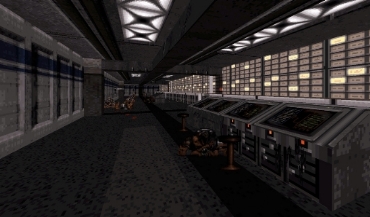