An old west styled tourist town located in a small canyon that's permeated with mine shafts. It's a nice dark and gloomy atmosphere offset with fires and lighting effects to provide some depth and ambiance.
The buildings are constructed with the traditional wood texturing as well as the flat fronted facades overhanging planked walkways one normally associates with late 1800s western United States.
The myriad of caves, tunnels, and small caverns are quite dark and are composed of various rock outcroppings, hanging roots, cracks, and other nuances that make for good underground mine shafts.
The building interiors are why the map falls flat; they're very plain, undetailed, have sizing issues, and just feel like almost no effort was put forth while making them. The layout consists of the main street and buildings acting as the center hub while multiple tunnels circumnavigate the town in the cliffside and have numerous amounts of entrances and exits.

Game play is a key card hunt. Acquiring the jetpack can render the blue key useless, but it doesn't really matter; the blue key is the first and easiest to find and it's actually harder to reach the jetpack. If you use the jetpack instead of the key to get inside you've earned that privilege. Finding the keys isn't hard since they aren't hidden, but you start out right away under heavy fire and you have to fight your way through hordes of aliens to reach them.
It can be a pretty tough challenge; a large portion of the weapons, ammo, and health are stashed in little nooks and crannies spread out all over the place. Without finding several of these you'll soon end up out of bullets and health.
A good portion of the baddies are set up in ambush positions such as on opposing sides of the street sitting back in alleys, perched up on cliff faces or lurking behind rock outcrops, hidden behind waterfalls, or up in window sills. Blindly going forward will get you surrounded and dead pretty quick. Take your time and explore, the map will be a bit easier and enjoyable. 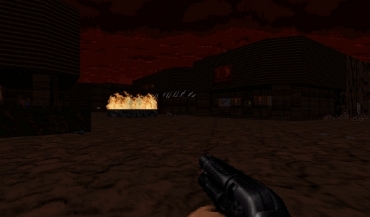 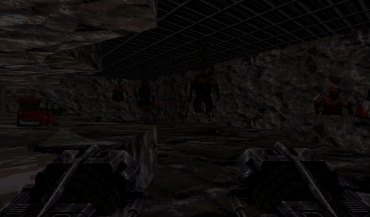 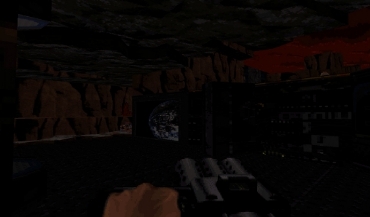 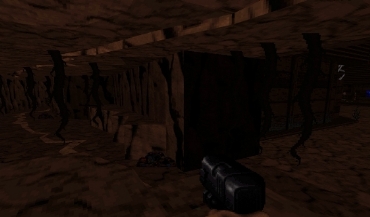 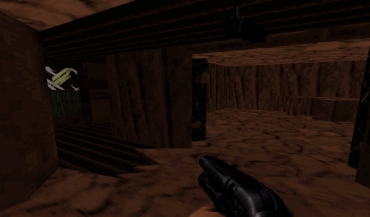 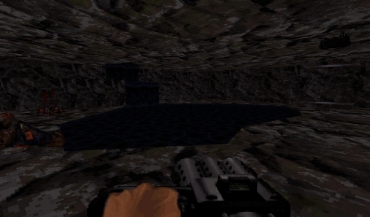