A medium sized city block styled map.
The objectives are to find the open building, locate a key or solve a button puzzle, then move on to the next building. The environment is made of multiple buildings with typical settings such as; library, bar, cafe, movie theatre, and hotel.
The layout is fairly open in the streets, but once those have been cleared, the only thing left to do is enter and explore the structures one at a time.
Construction seems basic; the buildings seem like boxes inside a larger box due to minimal trimming, simple texturing, and the long perimeter walls.
There's plenty of sprite work to act as filler inside the buildings, but several of the rooms seem to be bare and of the cookie cutter fashion and most of the street areas are rather empty as well.
Aside from the simplicity of the architecture and other aspects, the author does manage to pull off a few decent indoor areas with good shading, lighting effects, and small flourishes of detailing.

The flow of the map and combat are consistent throughout.
Duke starts out with minimal resources and the aliens encountered are very weak.
As the gun collection gets bigger and the supplies more plentiful, the enemies start getting tougher.
Health is doled out in minimal doses which can make the map a little challenging, but the level is loaded with secret areas of which most every one of them is loaded with healing objects, so it pays to find them.
Exploring around to find the secrets and keeping pace with the arms race against the aliens is what makes this map an interesting play. 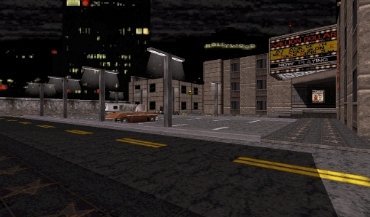 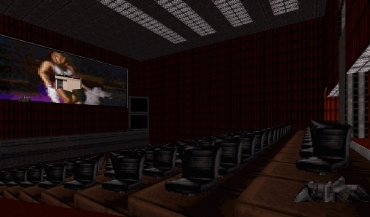 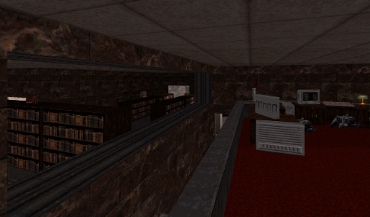