A city styled map with typical areas such as an alley way, a street and plaza, a library, office and apartment styled locations, a movie theatre, a fast food restaurant, and a supermarket.
Architecture is a bit chunky, but there's some nice detailing and sprite work. Texturing is good for the most part, but stronger shading would have really helped with the depth and ambiance.
The map is basically broken into three sections. The first section involves an alleyway that plays out very linear. The second area is an open street that acts as a hub to several buildings around its perimeter. The last is an open street that contains the final showdown with the main baddies.

Game play is mainly two key card hunts; the first in the alleyway, the second taking place in the street and plaza section. Progression is fairly simple; the keys and locks a easily found. Combat and alien encounters are consistent from start to finish. Aside from the spawns most of the enemies are placed for ambush styled attacks instead of head on engagements.
Weapons and supplies are placed sporadically. In the first section they are very limited and the player should attempt to make every bullet count and keep an eye on their health meter. Weapons can be a bit scarce, several are stashed away in secret areas, and finding them can tip the scale heavily in the player's favor.
In the later sections of the level there's health and ammunition everywhere. So the swing from too little to too much is pretty dramatic and makes the game very easy at the end. 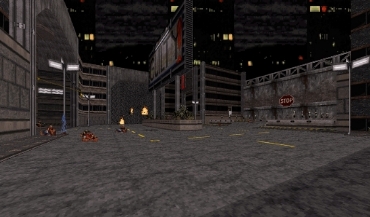 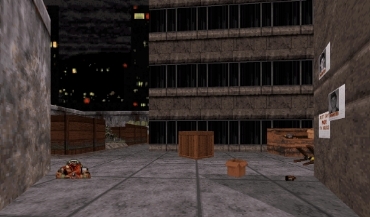 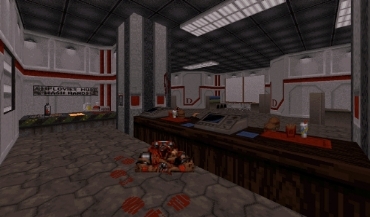 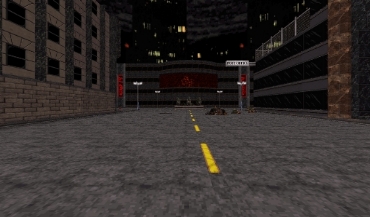 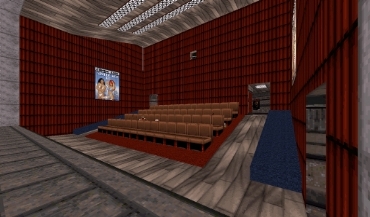 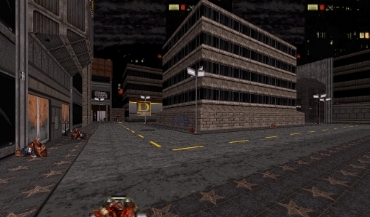