Duke is headed downtown for a little R & R only to find those alien bastards have taken over the city and are drinking up all the booze in his favorite bar. That dog don't hunt so it's time to kick some alien ass and eliminate the vermin.

A large map with a great design and layout.
Duke starts inside a bus lightly armed and after hopping out the roof hatch he must make his way through the town which has excellent detailing, well placed sprite work, good choices and use of texturing, and shading. The ambiance is further enhanced by the use of extensively detailed unreachable areas which add a sense of depth to the map.
After wasting a handful of alien scum the key card hunt commences. While the card is cleverly hidden; some patience and exploring pays off. This also gives Duke a chance to heal up and acquire some ammunition and expand his arsenal.
The theme of the map now reveals itself as a key card hunt interspersed with some evenly matched fire fights. There's a good amount of health and ammunition placed in stashes throughout and as Duke navigates the map and his arsenal expands and his weapons get more powerful; the aliens start to become tougher and more numerous. Entering various buildings to find more keys the great atmosphere is continued with very nice texturing, shading, and architecture.
The only part that seems out of place is the transition room and external scaffolding right before entering the bar. As Duke enters the bar he finds a stash of rot gut in the storage room.
No use letting it go to waste on the alien bastards; 'bottoms up!' Duke is now drunk, and this is pulled off well with the "blurred" vision and "stumbling", but he still must kill the stacks of aliens partying it up in the tap room. After a good knock down fight Duke isn't feeling so well and there's a nice sequence where Duke visits the porcelain god. Now feeling much better, Duke laments that the aliens are still infesting the rest of the town.
As he heads outside it's now night time and a lightning storm has blown in. How the hell long was he in the bar? The map continues with more exploring for key cards and some more building and room searching, each with their own unique characteristics. By now Duke is armed to the teeth and loaded down with health and ammunition which makes killing everything left that moves fairly easy.
There's several interesting puzzles that Duke needs to solve to get to the end; such as the collapsing ceiling tiles and the partially opening door.
Overall an excellent looking map. The fire fights start out difficult and the puzzles fairly easy. As the map progresses towards the end, the fire fights become easier and the puzzles more challenging. A little bit of everything for everyone. 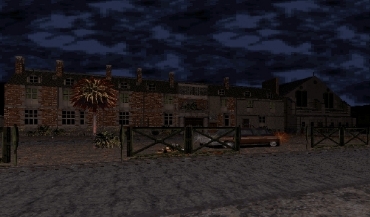 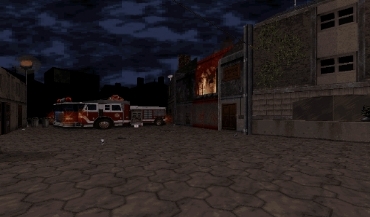 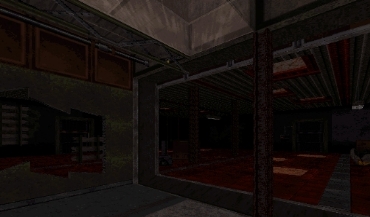 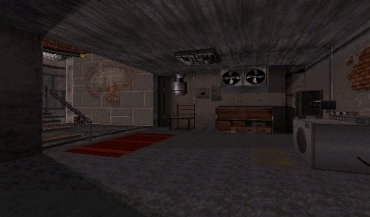 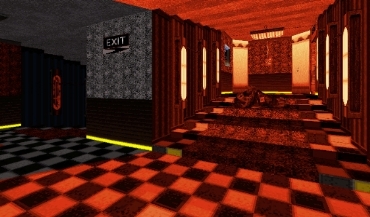 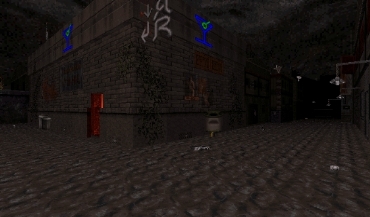