A city map with some typical locations such as streets, a fire station, and a grocery store with an adult club in the basement (and what supermarket wouldn't benefit from having some debauchery going on under its floorboards?). Also few atypical locations like a construction site and a partially destroyed building in the process of decay.
Traversing the map has its problems due to several severely cramped indoor locations. Duke starts out in his apartment which happens to be burning down and must navigate through town to escape the alien invasion. Normally not a problem, but this map presents some difficulties that may cause frustration.
With some switches it's not obvious that it's a switch and may require quite a bit of random clicking on what might be a button. Obvious buttons don't activate obvious things and it may take some time to figure what a button just did.
There's a wall that can be climbed to reach a window, but other than the fact that the player was led to this location and there is nowhere else to go, it's completely unobvious that the wall can be scaled.
There's a large, nine button puzzle to solve with no help anywhere to be found, though it does have a basic pattern for a solution. (spoiler: 101,010,101). Though the map is fairly linear, some areas just seem to dead end with no obvious path to follow due to the hidden nature of what needs to be done in order to progress, and with no clues or view screens to provide any assistance.
Definitely a map for the intrepid explorer type.

The map is mainly a key card hunt.
Aside from the difficulties presented in getting around in this map, the combat is fairly well balanced and challenging.
Duke starts out with a pistol and very little ammo or health available to get through the hostile environment and the initial enemy contacts. Once the first hurdle is overcome more weapons and supplies are provided in increasing amounts as the aliens get more numerous and stronger. 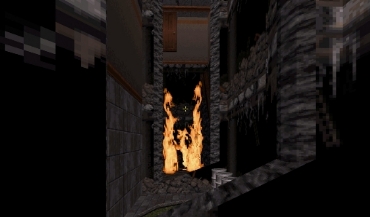