A mansion styled map.
The level is broken into four major sections; the inside of the building, the garden out back, the forest, and the maze.
The mansion consists of a foyer, a dungeon, a few side rooms where the mappers shows off his effects, and an attic.
Once outside the major locations basically consist of large areas that are relatively open for exploring before moving on to the next section. Everything looks old, worn, and abandoned with the overall effect being dark and gloomy.
The author also makes use of the lightning weather effect and there are plenty of ambient sounds to add to the immersion of being on haunted grounds.
Texturing is well done and there's strong shadows being cast by objects, but the wall contrasts could have used a bit more work.
Construction is a bit squared off with spotty detailing and trimwork, but there is some decent sprite work and a few neat little build tricks.
The layout is linear and pretty much a straight shot from start to finish unless the player gets lost in the hedge maze.

Game play is to navigate from point A to point B.
There are no real puzzles, buttons, or key cards. The path is clearly marked with arrows and messages so the only speed bump is the maze towards the end of the map.
The jet pack is needed to complete the level, but technically it only needs to be used to get out of the dungeon and to get into the attic.
Both very short flights so the possibility of running out of fuel is minimal without intentional abuse.
The farther into the map the player gets, the tougher it becomes.
Basically the ammo and health kit are provided right after exiting the mansion and those supplies have to last the entire map. There's enough, but don't get sloppy or careless. 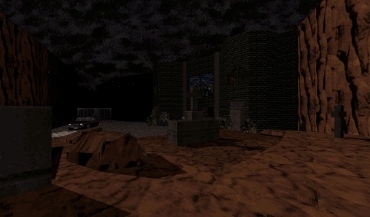 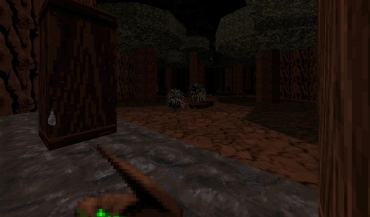 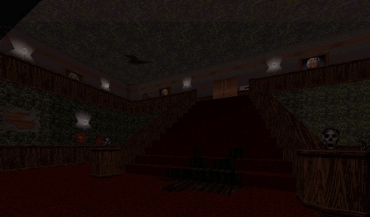 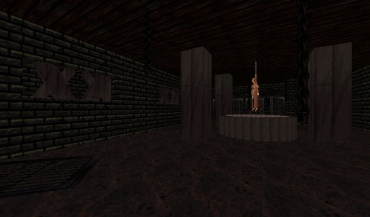 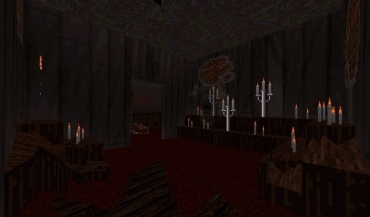