A cultist styled temple and cavern complex map.
The construction is pretty solid with nice rock outcroppings and vertical layering. While the detailing is minimal the architectural structuring with columns, recesses, and the general lack of flat walls, floors, and ceilings makes up for that. Texturing alignments can be a bit sloppy, but the combinations are well chosen and make structures stand out from the backdrop.
The only real issue with getting around is some of the corridors and stairways can be a bit narrow and it's difficult to get by the fire sconces without getting burned.
The atmosphere is nice and foreboding with strong shading, use of the pallete, and plenty of ambient sounds.
There are several different environments that include caves, fiery pits of lava, and medieval temples of which the map transitions from one to the next rather seamlessly.

Game play is a key card hunt.
There is only one hiccup and that's at the beginning of the level. A secret room must be found in order to progress, and while the door is slightly off texture to the surrounding walls, it is still quite camouflaged and easily bypassed. Once this little portal is found the rest of the map is pretty straight forward and smooth flowing.
There's an oversized cache of shotguns and ammunition at the start the map, but otherwise it is pretty well balanced and alien encounters are consistent and range from a few enemies holding their ground at specific junctions to small hordes attempting to block Duke's path. 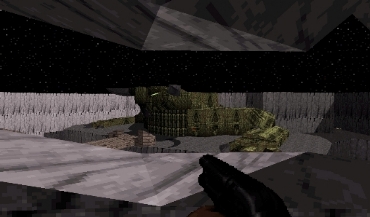 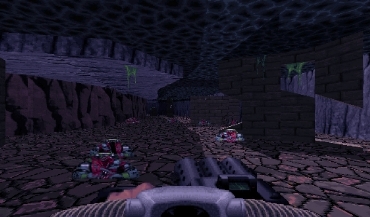 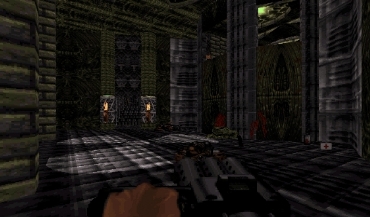