A city block map.
Construction and detailing are based on the Roch series maps and as such the locations are typical for what's in those levels as well; an extensive street and plaza, an apartment, an office, a hotel lobby, an automotive repair garage, and an industrial styled facility with a control room.
The architecture is solid and everything is trimmed up nicely, but there's nothing that really jumps out as incredible or unique.
Other than some odd shading and a few textures that need cleaning up, it's well done and there's just enough ambient sounds and environmental interactivity to get by on.
The downside is the story line from the previous map in the series was dropped which made the hub styled layout of sequentially exploring buildings that are only a room or two deep and evenly spaced around the perimeter of the street feel rather typical and empty; especially considering how short the map is.

Game play is a combination of key cards and switches.
Explore one location at a time, find a switch or a key, then move on to the next location. A slight twist is the red and blue locked areas hold something to get into the yellow locked location. Nothing's really hidden and there are no puzzles more difficult than shooting a button through a partially opened door.
Combat is well balanced. A variety of weapons with limited ammo matches up well with the variety of aliens that show up to pay a visit. The only things out of place are the healing items. There's plenty of it, but quite a bit of it is lumped together instead of spread around evenly. A few tough battles where it's almost inevitable that you'll take some damage may have you going back across the map looking for some hit point boosts. Luckily since the map is compact and small it's not as irritating as it could be otherwise. 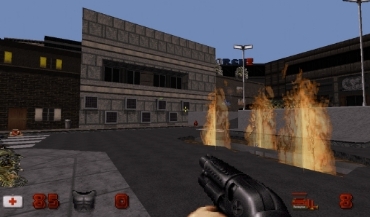 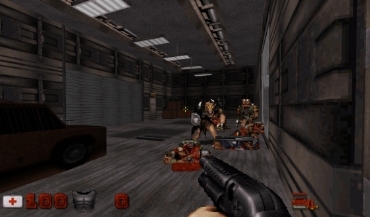 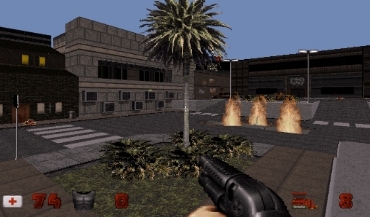 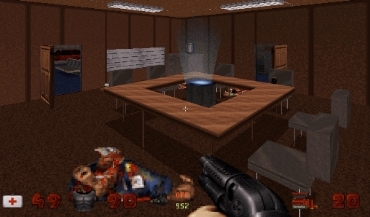 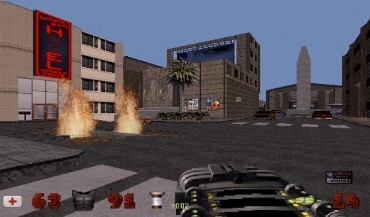 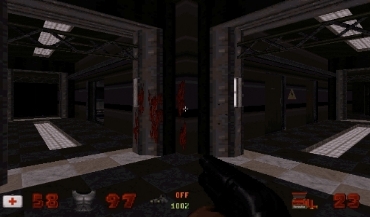