An underground island base overrun by the alien hordes.
Duke starts off in a helicopter and drops out off shore from the entrance to the underground facility.
The outdoor area leaves alot to be desired. Blocky, horrible texture selection, very unadorned, and the underwater area has alot of misaligned sector work.
Once inside things improve a bit. There's still a lack of detailing and most of the corridors are very narrow unnecessarily, but the texturing seems more appropriate and the layout is well designed.

Basically a throw the switch to open the door style map, fire fights are constant and with a wide variety of baddies.
The weapon selection is limited, but adequate. Health is sporadic and usually dumped all in one spot. Ammunition has a more even distribution as is provided in adequate amounts. 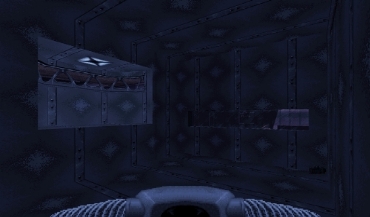