The first episode (Last Reaction - episode 4 in the game menu) starts in a canyon setting with several caves and caverns to be explored. From there it moves to a high tech EDF base hub with three mazes and then back to a canyon jungle with a volcano, a temple, and some interior locations including caves and high tech rooms which calls for alot of climbing along rock faces in a spiraling pattern.
From the Earth's surface the player suddenly find themselves in an EDF space station then on the lunar landscape that ends up in a moon city with open streets and several buildings accessible for exploration.
Then it's on to a frozen city back on Earth that is half above and half below the thick ice surface with several familiar areas that pay tribute to the original Duke3D episode.
Duke then finds himself in a partially destroyed submarine that must be escaped to reach and infiltrate a nearby missile base.
Finally back in the city Duke finds it's been partially destroyed by an alien space craft hovering overhead. After taking that out then it's on to the final showdown through a sports stadium concession and recreation plaza finishing out on the playing field.

The flow of this episode seems a little more enjoyable compared to the other.
The playing environments shift often enough from indoor maps to open aired outdoor maps that it breaks the monotony of seemingly playing nothing but a series of corridors and rooms over and over like the other episode.
The styles change often as well from using a hub with several branches to moving down linear paths with an occasional fork that may be used for keys, switches, or additional resources.
On the other side of the coin, deviating from the linear nature and using large open outdoor areas as hubs can provide a bit of confusion as to where to go to progress, especially when very few clues are given.
The maps in this episode tend to be shorter which allows for more consistent architecture throughout most of the levels instead of encountering the occasional detailed constructions, though there's still some instances of oversizing in a few of the maps.
The texturing also seems more focused instead of a mish-mash of mixed environments which helps with the ambiance.

Game play fluctuates the theme between levels from button puzzles to key card hunts.
There are some annoyances such as large button puzzles, several of these have clues, but not all of them. There's also an over the top teleporter maze to be navigated which requires alot of trial and error and really slows down the pace of the game.
The amount of resources and supplies provided in each map is evenly balanced on most occasions, but there are a few maps that may severely lack ammunition and a rare instance of healing kits being spread a bit too thin.
Most levels have the supplies lumped together in only a few spots and oddly placed causing backtracking to restock. This can cause a hassle on the more linear styled maps, but isn't much of an issue on the more open layouts.
One thing the player may notice; sentry drones get old after awhile.

The second episode (Water Bases - episode 3 in the game menu) starts out with some kind of alien-esque space station then progresses to planet side EDF and EDF-alien hybrid bases. Eventually the levels end up transitioning from an undersea city to an island based military compound, then to a rocket launching facility which leads back to a space station, and finally finishing back on Earth.
Most of the first maps are fashioned after high tech military bases and stations, either of EDF or alien origin, with occasional natural rock caves and tunnels.
The later maps are more towards high tech and EDF military fortifications with a few maps that have city elements.
All the levels are pretty big and take a while to complete.
The majority of the action for the whole episode takes place indoors along various corridors and rooms of many sizes and shapes. There are occasional underwater corridors and caverns and even rarer outdoor locations. There are some oversizing issues with the construction, but no game stoppers.

The maps are based on key cards hunts and follow one of two formulas. A hub with three or more branches usually following the sequence of exploring a branch, get a card, return to hub, unlock and explore the next branch.
The other method is a linear path with a fork in it; one fork is locked the other fork holds the key.
Most of the episode is of the unlock, walk, and shoot, but there are some annoyingly large numbered multi-button puzzles that slow down the pace in large maps that already take some time to navigate..
The first few maps are pretty difficult. There's barely any ammunition or available weapons, hostile above and below water environments to contend with, the addition of enemies with hard hitting amplified attacks, and the severe drought of healing kits will eventually take its toll.
The later maps of this episode are still a bit hard, but the balance is a little more even. But the placement of supplies is a bit off, so expect to go back to earlier sections of the maps to restock.
In the mid to later maps the game starts getting tedious and predictable with the sentry drones, slimers, and newbeasts. 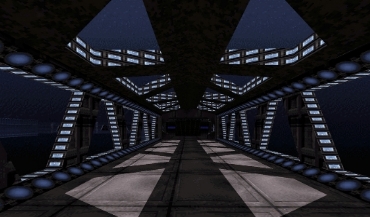 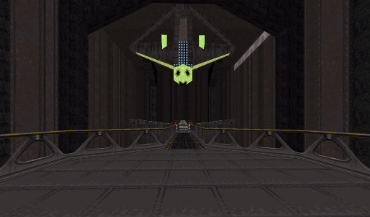 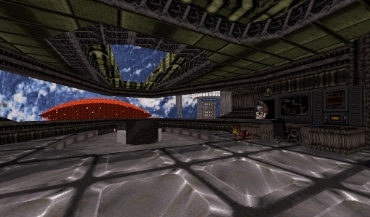 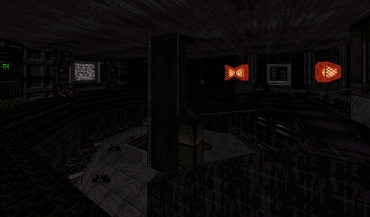 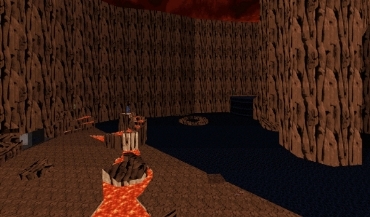 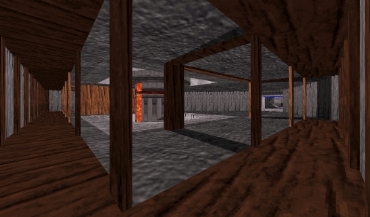