A large city styled map.
The level consists primarily of a one block area with a few alleys and back streets.
Aesthetically the map is not very well done; the core is there, but it's not well polished. The entire thing from start to finish is full of sloppy and misaligned textures, oversized objects, invisible walls that are one way blocking allowing the player to get stuck into the background, and choppy mis-layered parallax skies.
Some areas actually do look nice and are well detailed, but there are just as many plain untrimmed blocky locales.
The biggest positive this level has is the multi-layered layout with a street tier, building interiors, skywalks connecting skyscrapers, and some rooftop hopping.

Game play consists of blasting horde after horde of alien swarms and finding buttons.
Killing the aliens is the easy part; there are truck-loads of ammunition and supplies and enough weaponry to supply a small army. Blast away to your heart's content.
The frustrating aspect is the buttons and switches.
The map is wide open, the player is provided a jetpack fairly early, and they can pretty much go anywhere they please; even bypassing some of the locks. When certain switches are thrown a door somewhere in the map, it's on the player to find it, is unlocked. This is indicated by the light next to the door turning from red to green. Activating all the buttons will cause a building to collapse allowing access to a back alley and the sewer treatment plant.
Now meet mister confusion. Buttons and switches, and there are ALOT of them, can be hidden just about anywhere: in secret areas, behind masked walls, camouflaged into the scenery and detailing, on the backside of some small architectural structure next to a wall, up in some jetpack access only apartment or platform. Since the map is so open, mainly due to the jetpack, it's hard to figure out what the switches unlock or if they've even unlocked an area that hasn't already been visited due to being able to bypass locks.
Scenario as follows; throw switch, run around looking for the green light, great a new area opened proceed -or- crap been here now where do i go? Repeat a bunch and add in lots of aimless wandering. Wait, it gets better. The building can be collapsed but the sewage treatment plant can still be locked, go back and re-explore the entire city looking for that switch that was missed. The sewage treatment plant can be unlocked, but the building still not collapsed. The player's unlocked something but they'll never know what it is until they find that elusive button that was missed, go back and re-explore the entire city.
The mapper threw in a free bonus; the last switch and button are thrown now it's on the player to know that way on the other side of the map on some obscure wall behind a rather unobtrusive apartment building a secret invisible door opens that allows them access to the exit.
If that wasn't enough toss in an eight button puzzle that locks the last door and has no clues to help the player out.
I'd play this map to shoot the hell out of aliens and look at the neat tiered layout. If you solve the puzzle as well, then bonus. 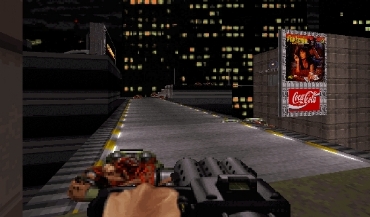 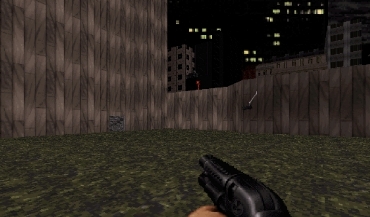 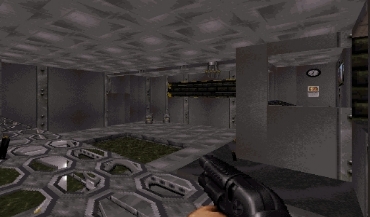 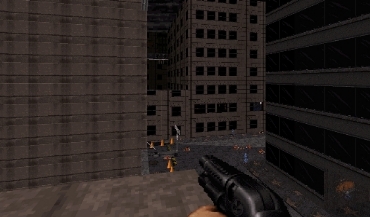 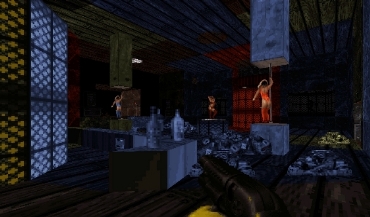 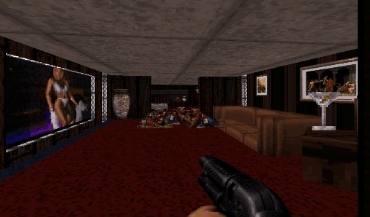