An EDF styled lunar base.

The usual flow of the map is a corridor feeding into a room which has a two or more passages branching out of it. A couple of the passages may lead off to side rooms such as latrines, control rooms, conference rooms, or storage areas.
Occasionally one of these branches contains a small section, like a set of barracks or state rooms. These areas are optional. Most of the time they contain additional aliens, sometimes they might have extra supplies or weapons.
The final passage out of the hub continues with the main path.
The assortment of rooms, inclusion of some partially destroyed areas, and the decent detailing make for a nice atmosphere. Multiple viewports to outside scenery and the constant rising and falling shifts in elevation makes it feel like the player is actually making progress.
The poor shading in several places is about the only knock to the ambiance. There is also a slight hiccup in the linear path as there's access to an underground cavern and sewer system that are quite extensive and contain nothing. The work on them is complete and it appears that the mapper was going to incorporate the section into the game, but changed his mind for some reason and then didn't block it off.
Gameplay is completely about combat. It's a fight from start to finish and there's very little reprieve. Unless you find yourself in the underground cavern. At which point Duke will take damage from fruitless exploring. More fun than a baseball bat to the back of the head. 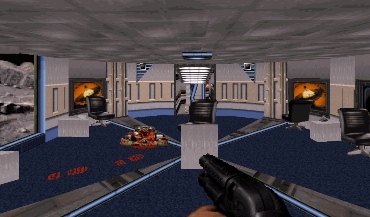 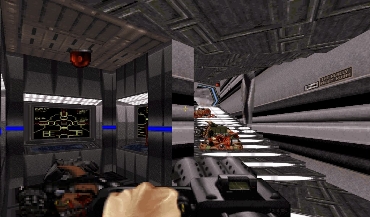 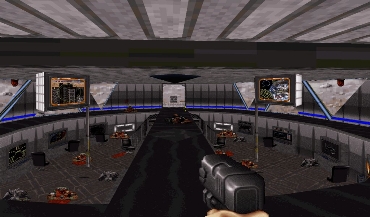 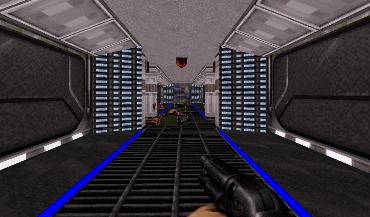 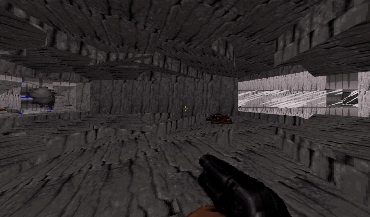