A city styled map consisting of a few streets and some typical locations like a garage, a club, a fast food restaurant, and some offices.
It's decently detailed and there's some vertical movement via jetpack and sewer holes, but the trimming and wall shading are pretty weak which makes the outdoor areas look flat.
The layout is open as far as the street goes, but several of the buildings are locked, some explosives are required to enter a few locations, and a jetpack needs to be found to reach some of the building windows.

Game play is a card hunt.
At one point and depending on the sequence in which the player visits locations they may have access to two blue cards at the same time. Other than wandering around the streets looking for open structures this is the only major cause for backtracking. Access to a couple locations can also be a bit muddled since there aren't any serious clues to indicate to the player where explosives need to be used to open a passage. Mainly the basement access cover and the front window of the photography shop aren't clearly marked as destructible.
Combat is pretty intense in the beginning with the streets loaded down with aliens and Duke is barely armed. Depending on the path chooses either the player will strike it rich with a stash of weapons and ammo, or spend some time running until the cache is happened across.
Otherwise the map is pretty well balanced and respawns keep the action pretty consistent. 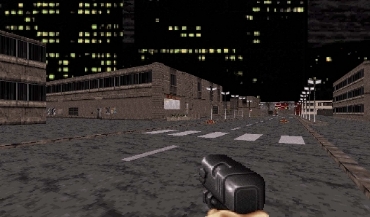 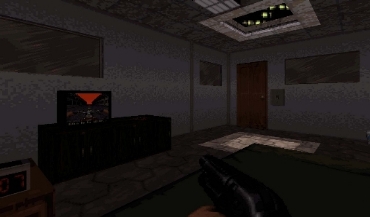 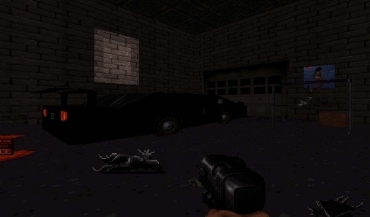 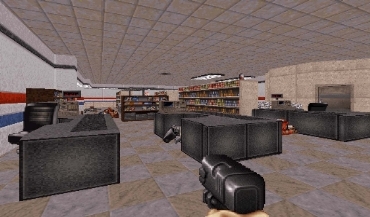 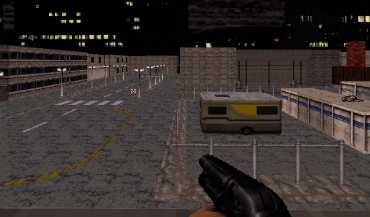 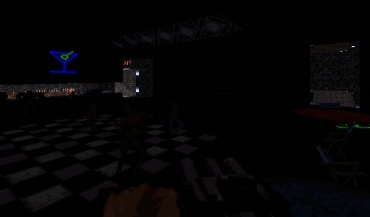