A city block map with a street area, a recreational park, a few office buildings, a kitchen and adjoining lunch room, an internet cafe, a smoke shop, and several more locations.
The layout of the map is set up in two stages; first is a street area with an office building.
The office building is basically a long hallway with a series of doors.
The next stage is an open recreational area with an adjoining plaza to another business office styled building that consists of a series of floors accessed via stairs or elevator.
Most of the indoor areas are very cramped which make moving around and fighting pretty difficult.

Game play is based on key card hunting.
Most of the keys and locks are easy to locate except the red lock which is stashed in a hidden location. It's not overly difficult to find if you take your time to look around instead of running in a room, blasting everything, and then running out.
While exploring the initial office building hallway with alot of rooms; there are some that are worth entering to fight for supplies, while some are suicide.
You may end up fighting very strong aliens with nothing but a pistol and almost no ammo, and the results are little to no payoff.

During the first part of the map the game is very difficult; Duke only has a pistol and very little ammo to handle the amount and type of aliens in that section. Unless the player is already familiar with the map, or gets very lucky and chooses the right path to get an additional weapon, it gets to the point where the player is depending on enemies dropping supplies.
There's so little health through most of the map, especially the first section, that if Duke doesn't get any weapons or a good supply of ammo relatively quickly to defend himself, then it's incredibly hard to progress beyond the hall of offices. 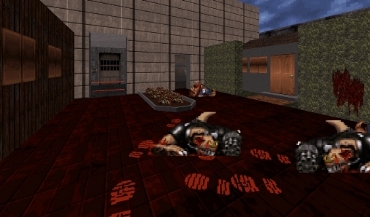