A two map mini episode: Duke is dropped off on a planet to investigate reports of an alien takeover.

The first map starts out amid temple structures located in a valley. Mostly outdoor; the map leaves plenty of wide open space to explore around before entering a layout of underground corridors. The outdoor areas have a nice atmosphere with plenty of ambient sounds, some exceptional architecture, and the shading and texturing are well done. Once inside there's a slight design problem of over sizing, but it's not terribly obvious.
Gameplay is decent; with a bit of exploring Duke collects some serious fire power and has the enemy out gunned. The majority of the aliens are encountered in clusters, with only a few strategically placed snipers, and most battles aren't of any considerable difficulty if you aren't shy about using the heavy fire power.
Duke will inevitably take some hits from fighting all those enemies, but there's an even distribution of health to keep him on the move.
The only down side of this map is that it ended pretty abrupt and unexpectedly.

The second map in the series starts Duke unarmed and in a cell after the aliens take him prisoner. Weapons are nearby and easy to find but they aren't just handed out. Be quick with your foot and even quicker on your feet and you'll be fine.
The majority of this map takes place in base styled corridors and rooms. Unlike the first map, this one is a key card hunt. Also unlike the first map, the detailing and shading aren't up to the standards of the previous one. The over sizing design is more obvious in this map and quite a few areas seem barren and empty.
The aliens are a little more spread out with only a few exceptions of some group spawns and the huge final battle at the exit.
This map is loaded down with ammunition and health, but the weapon selection is more limited than the first level. No fear though, there's plenty of ammunition for the weapons that are available.
The layout is a bit more linear than the outdoor areas of the first map, but there's plenty of passages to give Duke the option of which path to take. 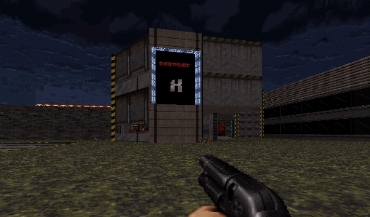 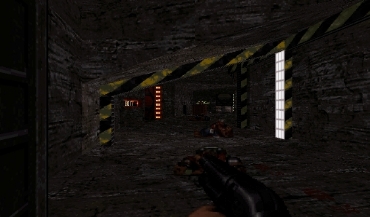 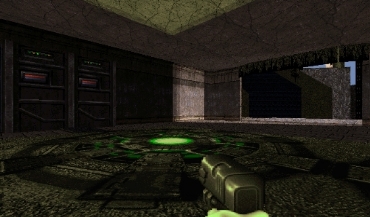 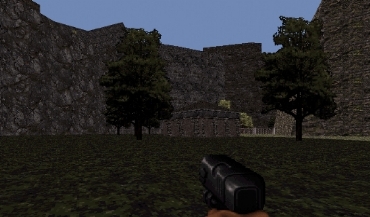 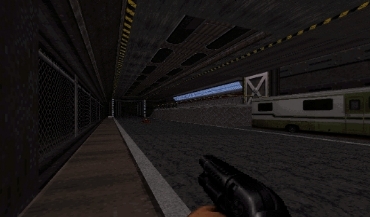 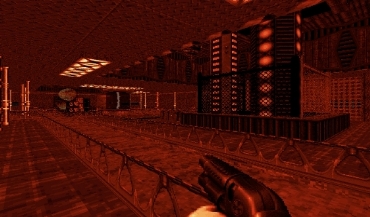