"No way I'm eating this shit!"
Duke is working as a chef and bottle washer (!) on a spacestation. The station is serving as a 'R & R' facility. For maximum welfare the station is equipped with multiple "holodecks". Well, the goal is to explore one holodeck and unlock or find the key to the next. And so on for a couple of times. The holodecks diversifies from greenhouse via caverns to dark medieval like rooms. There is some back tracking involved and some of the areas can be tricky to find. Design is good throughout the level. As the title indicates: The author has put all the different decks on top of each other in Build. Not always a good idea since sounds may travel into areas where it isn't supposed to be....ah well. There is a armory and a sickbay stuffed with supplies....You might find yourself there more than once!.

An EDF space station styled map.
The level consists of a lounge area and three holo-decks with unique environments. One holo-deck is a forest grove, the second is a subterranean cave system, and the last is just a large rusty metal room. The map is pretty small and very simple in construction and design. Aside from the cave section everything is pretty flat and squared off.
The ambiance and detailing are also of the most basic variety and there's not much to enhance the atmosphere.

Game play consists of going into the holo-deck rooms and retrieving keys. Aside from the cliff jumping in the cave deck there's not much to it.
Combat is unchallenging. Even with ambushes and packs of aliens to contend with there is so much ammunition and healing items that the threat of danger is pretty minimal.
There are also a couple issues with the design. A large amount of sector over sector work is used so aliens can clip in and out of different locations quite frequently.
The biggest problem is the player can mess up the exit path. There's a small section of wall that allows the player to get under it in shrunken form, but for some reason the author decided to make it raising/lowering sector. If the player happens to press use on that section of the wall it will lower, but when activated a second time it fails to raise high enough for the player to get under which effectively prevents them from being able to finish the level without clip cheating. 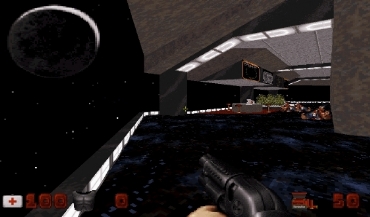 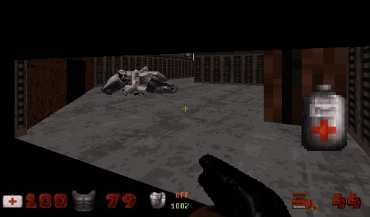 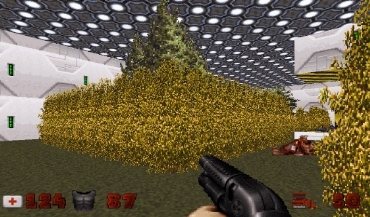 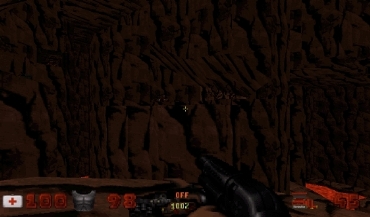 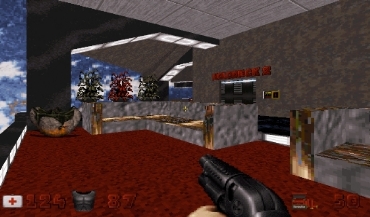 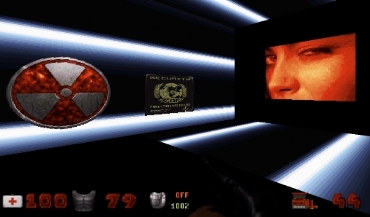