A six level single player, seven level multiplayer total conversion based on the movie Platoon which takes place in Vietnam.

Platoon Atomic version installed and ran fine out of package. I had to use 7-zip to extract the files out of Platoon.Dat for the 1.3 version.
There are new enemies based on VC, weapons based on era correct U.S. military, along with sounds and art to enhance the overall combat experience. The enemy VC troops are all dressed in rice hats and ragged clothes, but come in four varieties: assault rifle carrying which equals your M-16, machine gun carrying which equal your M-60, a suicide bomber that will run up on you and try to blow you apart and a stationary manned mortar that fires rocket. They also come in different strengths based on the color of their clothes and can get pretty hard to kill.
The provided weapons are decent, but most projectile guns have strengths and weaknesses. The M-16 is accurate, but has to reload often, the M-60 machinegun hits hard but is pretty inaccurate the farther away the target is, the sniper rifle is very powerful, but is also very rare and carries very little ammunition, and the flamethrower covers alot of ground, but is slow to kill and is also very rare and limited on ammo.

All the maps are pretty simple in construction, layout, and design, but they were done this way to suit the purpose of the TC which is face to face combat and survival. Don't expect huge amounts of eye candy or incredible architectural structuring, they were made simple to keep the game simple, but what is there is well done. The only major annoyance is the large amount of invisible walls.
Areas range from open, bombed out fields, jungle forests, swamps, canyon roads, underground tunnel systems, and war torn cityscapes.
In each level the player starts out in their barracks room, selects one of two options to collect the supplies for that map, head to the briefing room to get the mission then goes to the copter landing pad to head to the battlefield. On the copter pad there are multiple teleporter pads to take you to the action, it really doesn't matter which one you chose since they all take the player to the same general start point.

Game play is pure combat and survival. Other than a couple wall cracks and a few doors to unlock, there is very little environmental interactivity.
Most of the levels follow a similar formula; advance on an enemy position, dig in and defend against the charge, take out the foes hole up in fighting positions, advance to the next battleline and repeat. Just keep an eye on your backside, those VC are pretty sneaky.
There are additional dangers on the battlefield besides the enemy forces; landmines are strewn across most maps and can be difficult to see. If one is stepped on it gives an audible clicking noise and gives the play a few seconds to try to disarm it. You can also attempt to blow them up with explosive weapons, but it's a waste of ammo and better to just go around.
A few of the levels have radios where the player can call in artillery fire. This is only effective if your position is being rushed by a large squad of baddies and has little effect against the opponents that are dug in and fighting from bunkers and foxholes.
There's an additional hazard of charging enemy lines with a bit too much vigor and haste; a few scripted flybys from planes dropping bombs or napalm can really ruin your day since they can't tell friend from foe.
The final battle with the VC leader is a bit disappointing as it is extremely easy to kill and has no weapon other than an AK submachinegun.
Supplies on the battlefield are very limited, but you will find a stash here and there in all the levels, finding most of them will be enough to get by on. The toughest part is managing healing items. These are very rare and the enemy hit hard. Use them wisely and save often. 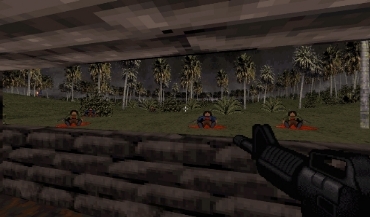 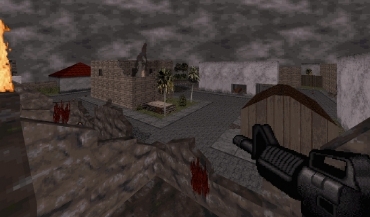 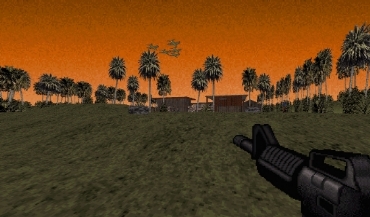 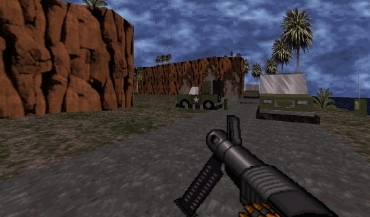 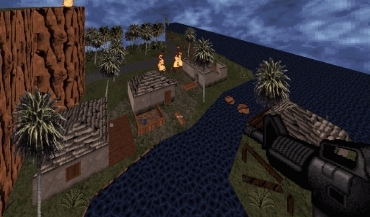 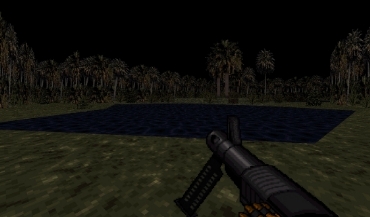