An EDF space station map.
The atmosphere and ambiance in general are pretty flat for most of it due to the lack of trimwork, detailing, and strong shading, but there are some glimpses of effort to create an engaging environment.
Though scattered thinly there are some rotating sectors and sounds, as well as palletes and lighting effects. Some variations in texturing also help, but with the lack of trimming, most of it still appears pretty squared off and boxy.
The layout is set up like a big wagon wheel with the hub being the center of the station that's open to outer space and where the player has to walk along the top of ventilation shafts and small platforms that hold residue of atmosphere. Step off these and suck vacuum.

Game play is key cards and switches.
It's not immediately apparent exactly what the switches do since there are no view screens, but they're easy to find and not too far off the beaten path.
The red and blue cards are the only ones necessary to finish the level.
The yellow cards is used for extra supplies and the player is given three choices on which door to unlock which adds a bit of randomness to what the player is rewarded with.
The station isn't very big and there aren't that many enemies, but the balance is set up where the player slowly acquires weapons and ammunition as the enemies get more numerous and tougher.
Add in the stingy amounts of healing items and the map can be a decent challenge. 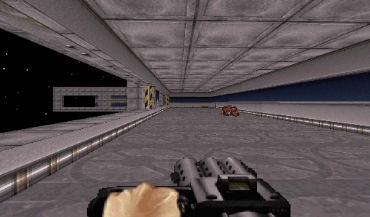 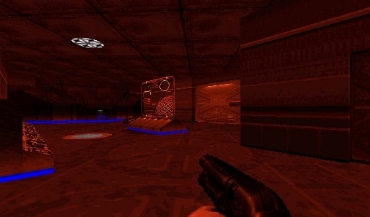 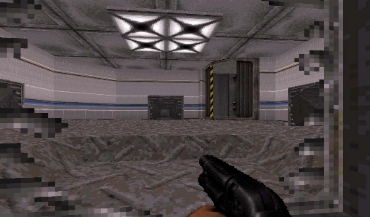 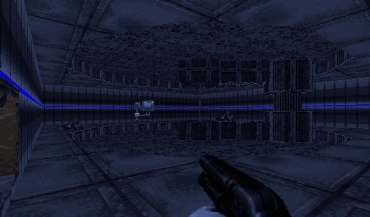 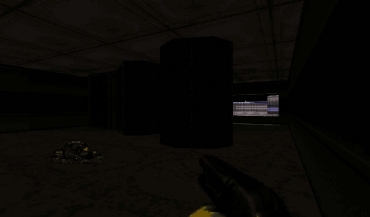 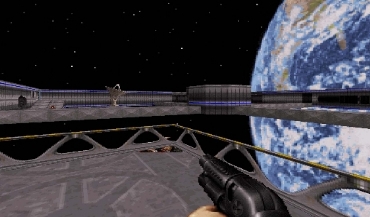