"A film should start with an earthquake, and then the stress should continuously increase" - this quote by Alfred Hitchcock seems to have been taken quite literally by Merlijn while working on the "Shaky Grounds" episode.

The mod totals 5 large levels, 3 of which have been already released during the past 5 years and now only slightly adjusted for the episode, while the 2 last ones are brand new. Nevertheless, I would definitely recommend to play the whole thing at once, whether as an episode or map-by-map, to have the proper, full experience.

The premise is simple, like taken straight from some catastrophic Sci-Fi movie - yet quite original in a Duke map due to the scale it requires to pull out: there is a large series of earthquakes trembling down a town in the Netherlands and soon it unveils that the aliens are behind it.
Before long, we indulge into a full-blown story of tragedy, personal revenge and Duke being once again the humanity's only hope. The story is surprisingly cohesive and full of reasonable plot twists, even having a shot at elaborating a bit on our protagonist's character - as well as that of his nemesis. It is told by some of the best visual storytelling entangled within the level design, with occasional help of viewscreen messages.
Despite the bleak tone and seriousness of the story, Merlijn finds a way to also include some dark humor typical for a classic Duke game into it, along with some genuinely funny Easter eggs and references to other maps. These things never get in the first plan to distract from the main plot or gameplay, but are a welcome addition for the careful observers.

The first level, "Apocollapse", starts with an impressive earthquake scene, immediately throwing the player into the action with an elaborate escape sequence. When we finally emerge into town, there is a scenery of death and destruction - and the first thing to do is climbing a collapsed, inclined building to even get out of the hole we landed in!
Later we are free to explore a large part of city (that even has a map shown on an informational screen), including a residential district, a precipice freshly created by an earthquake and a mall, which is the central and longest part of the map.

In the 2nd level, "Tales of Tragedy", we enter the Cool Center, which is a large concert venue/theater which links two districts of town. After fighting his way through it and passing through a very unorthodox office building, Duke will find himself in the town square full of restaurants and cafes as the story slowly unveils the details about our enemy and their motives.
It's worth pointing out that "Happy Hipster" includes some of the coolest jokes in a Duke map, even subtly breaking the fourth wall. Towards the end, the level ventures into more Sci-Fi, alien structures, which are seamlessly and naturally connected to the devastated city.

The third level, "Epicenter", takes us into seemingly less destroyed part of the town, despite the level's name. However, this sense of serenity can be deceptive - after we clear the more usual locations around town, such as a record store, bar, drug store or cheese market, it's easy to lose one's alertness, hence increasing the effect of the sudden blow that's about to happen.
The later part of the level is a wild ride that contains the scenes of destruction done on a truly epic scale, perhaps defying the physics and challenging the gravity, but certainly leaving a stellar impression. The level ends on a depressing note in one of the most atmospheric sceneries done in a Build game, which takes full advantage of its specific aesthetics, emphasized by strong contrast shadows.

After that, we enter the mysterious Kompleks, which serves as an alien HQ, in "Deeper Underground". Turns out the building is a concert venue with some of the best design seen in a Duke map. It also leads underground to where the source of all evil lies - after travelling through slime rivers and giant underground lakes, the level climaxes in an epic battle fought in enormous underground cavern, infested with all kinds of aliens and their ominous machinery.

The "Final Rumble" takes us down even deeper towards the center of the Earth - there is no trace of human habitat anymore, just monumental alien structures and barren rocks. The level pays tribute to the more classic style of level design, making a lot of use of verticality and moving sectors, while still maintaining a distinct visual style provided by careful use of textures and palettes.

Each level picks off at the moment the previous one finished, making for smooth and logical transitions. The style throughout is very consistent, both in terms of gameplay and design, almost as if it could be one, enormous map, if it only wasn't for the Build limits.
However, each map also has something very distinguished and memorable, whether it's the tall buildings collapsing on your very own eyes in the first level, the sequence in a tipped over office building which we travel sideways in the second one, the dramatic destruction scenes in an unmatched scale in the third map, the enormous underground caverns and lakes in the penultimate level or perhaps the most original twist on using a boss in a Duke 3D map ever in the final. It is also the case where the whole episode is much more than just the sum of its parts, that is the separate maps.
The immersion, both in the sense of location and the story, is much deeper when playing through the whole episode. In the end, it would also be very difficult for me to pick my favorite level or part of this episode, due to how many outstanding scenes there are.

The design is top-notch consistently throughout the whole episode. From the very beginning, we will see jaw-dropping visuals done at a very large scale, yet full of little details and concluding into realistic environments. Original and innovative use of textures and palettes has always been a strength in both van Oostrum brothers' maps, here probably reaching its peaks.
The shadows are realistic and used for extra advantage of emphasizing on the levels visuals - especially the 4th level shines here, using a lot of layered shadows, strong contrasts and on top of that, small, detailed shadows that help to sell the locations even more.
There's also some very clever use of sprites and textures for things rarely seen in Duke maps - examples of these are bakery in "Apocollapse", cheese market in "Epicenter", drums in "Deeper Underground" and other various musical instruments seen throughout the episode.

However, the aspect that truly stands out the most is the episode's conceptual grandness - the 2D layouts of each map are carefully planned to make the best use of space and resources, there is plenty of verticality and platforming that keeps the player engaged, the large scale sceneries look magnificent and the whole episode maintains a strong feeling of a true 3D environment.
Despite the non-Euclidean and "2.5D" nature of Build engine, here the player has a solid sense of location, which helps both the navigation and immersion. Crossing through the tipped over building in "Tales of Tragedy" is perhaps the most pronounced example of that, but the multi-layered, full of sector-over-sector layout of the Kompleks is just as good in this aspect. One of the reasons for that might be the fact that many locations were based on real life buildings or places - the Kompleks, Doeniezo Mall, Cool Center and town square in "Epicenter" being the finest examples of that.
Merlijn has not only managed to translate and interpret these locations into Build's specific language and form, but also enriched them with a twist of destruction and alien infestation.

The gameplay/combat is very entertaining throughout the episode - despite the trickery of the scenery, Merlijn has somehow got the dimwitted enemy AI to cooperate, which is especially praiseworthy in case of long-range, vertical encounters with commanders and other flying enemies.
The ammo/enemy balance is mostly designed with pistol starting each level in mind, so playing through the whole episode, you should have more than enough guns not to worry about them. However, the battles will still prevent the player from just overusing the shotgun/chaingun combo - even your standard pistol will come in handy quite often.
Each level has some larger fights that will provide a challenge to the players, using carefully chosen combinations of enemies to keep it interesting, while also having calmer or more usual parts serving as breathers. The pacing of such long maps is very significant, not to exhaust/bore the player, and Merlijn does that just right by constantly changing dynamics and allowing the player the satisfaction of clearing an area before throwing more monsters at them. Even the choice of monsters regarding story/progression is flawless, with e.g. pig cops stopping to appear as soon as we descend deeper under the city.

From the technical point of view, there's a lot of effects put to a large scale that need perfect synchronization to work properly, such as earthquakes, explosions and rising/dropping floors. Merlijn also isn't afraid to play with dynamic light effects, both in the form of flashing or cycling lights and the long forgotten craft of light switches, one of the gimmicks of the original game. However, the most innovative effect must be how the boss battle plays out, adding a lot of extra challenge and being very original at the same time.

All the levels (especially the first 4) are very open and inviting for extra exploration besides just moving towards the path to goal. There isn't much backtracking involved, yet there's a lot of room for free roaming or looking for alternate paths (especially the 2nd map shines here).
There is plenty of secret places scattered around, most of which aren't just small compartments, but actual rooms or even parts of buildings, often with some Easter eggs to be found inside.
There are also 2 unmarked "super secrets" to be found throughout the episode for extra fame and glory. Moreover, the shrinker, which can be one of the most powerful weapons, can be only found in the secret places, making it somehow unique throughout the episode.

Last aspect worth mentioning is the new music in "Shaky Grounds", which was composed by Merlijn himself. From the ominous remix of "Sneaky Snake" in the first map, through upbeat, yet stirring into your brain with dissonance track in "Tales of Tragedy", majestic and bleak piano-driven song in "Epicenter" and progressive, rhythmic track in "Deeper Underground" that seems to sync with your descent, all the way to the vigorous industrial metal song in the finale, the soundtrack fits well with each level. But it's not just a very good video game music, but simply neat songs in general that will keep playing in your head long after you have finished playing.

Conclusion: I am positive this is just the best thing I have played for Duke during my 20+ year adventure with this game. Merlijn just managed to make a consistent, extremely entertaining episode, with immersive story, strong atmosphere, masterful design and epic scale, balancing out the pace and tone and topping it off with complimenting music. Nitpicking on anything here to denounce even a point from the perfect score wouldn't give this pack justice. 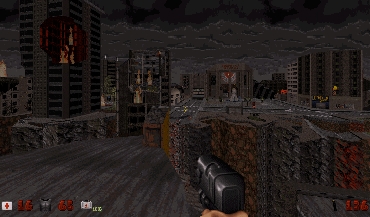 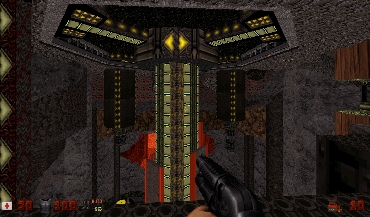 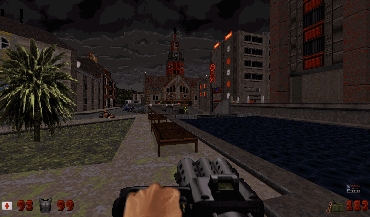 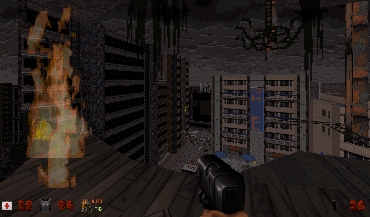 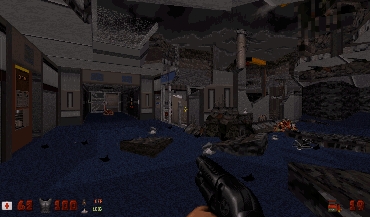 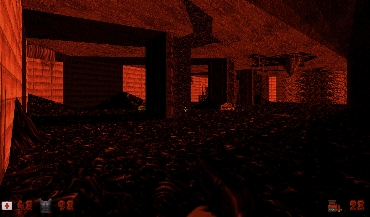