A large city styled map consisting of several buildings, a street with a large plaza, and a few alleyways. It's pretty dim and gloomy and the entire map is also done up in a greyish brown pallete making the entire atmosphere even more deeply shaded. It's good for the ambiance, but does affect gameplay. Essentially it camouflages item pick-ups and the subtle clues into the scenery. In such a huge map loaded down with aliens it can get pretty tough to maintain a fight when part of the challenge is being able to find ammunition and health while under sustained fire.
The pallete may also make it difficult to see the hints that help with progression which carries the potential to make things a bit frustrating.

The main premise of the level is to get jetpacks and fly around locating open windows in order to enter the structures and find buttons.
The player is provided fifty jet packs, and due to the shadowy tone of the map, and the character of the pallete blending the textures together, the player's probably going to need most of them in order to find all the locations. The level is also very nonlinear which allows the player to pretty much go where they please. It's great for those that love exploring, but it can also cause some nasty road blocks to survivability.
The weapons and healing items are scattered thinly around the map and respawns are not of equal proportions. One room might cause a handful of troopers to appear while another location may bring forth some fat commanders. There's a chance the player will only be armed with a couple light weapons and set off a trigger producing a street filled with mini-battlelords.
There's a bit too much randomness in weapon and ammunition acquisition versus enemy encounters. 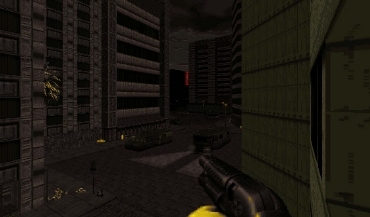 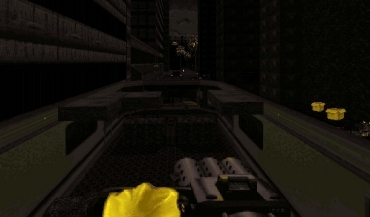 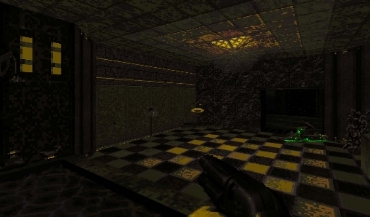 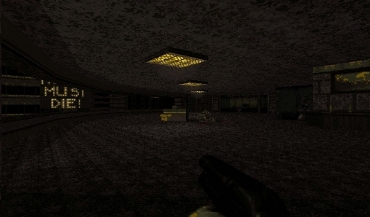 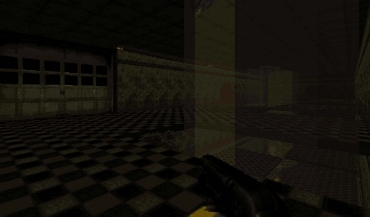