A collection of three maps based on 100 sectors by Merjin van Oostrum
The aliens have taken over the city and your job is to kill them all and get out.

Game play is linear and is a find the key to progress towards the exit styled map.
Play areas range from wide streets to interior halls and rooms. Architecture is standard, while shading, detailing, and texturing are well done for both interior and exterior areas. Sprite work is well done on the first street but the second street is overcrowded and makes the area seemed cramped.
You battle a cluster of enemy then you walk about looking at stuff until you happen upon the next cluster of enemies. The author favors pig cop tanks and turrets.
Most weapons can be found and there's plenty of ammo for all, although pistol ammo for the most part could only be gathered from dead troopers after leaving the first street.
Health is a bit stingy in the beginning, but picks up in the second street area.
Gaining tactical advantage was fairly easy in most cases as there's plenty of cover. Although, there is one instance where you get caught in a booby-trap explosion in a small room and a commander starts launching rockets in with you to keep you warm.
There's another instance where you must shrink yourself to get through a duct and you enter a room with three ceiling mounted turrets and nowhere to take cover.
MRCK is good for making microscopic cracks, so if you find yourself stuck, look for a small imperfection on a wall.

Very simple in design, the area with the caved in roof and severe building damage was well done, everything else is pretty sparse, empty, and basic.
There's quite a bit of haphazard texturing, and the outdoor shading is good, but the indoor shading is weak.
Game play is linear until the second street area is reached, then it becomes rather random. Through reasons of his own there's no yellow key and the door is unlocked so the player can pretty much go straight for the end.
If you decide to explore there are several booby traps that instantly kill the player, and there's no rhyme or reason to the process of discovery; just pick a direction and go.
If you decide to go straight for the finish, you get loaded down with health and ammo galore as well as a huge arsenal of heavy artillery.
All this means is there's no challenge to get to the nuke button.

Well designed and detailed.
Plenty of spritework and trimming to give the level some depth and atmosphere.
Architecture and the layout are decent; there are only a few indoor areas that are a bit too cramped. Shading isn't very strong, but some decent texturing combos, as well as exploding parts of the city, give the ambiance a boost.
A pretty straight forward key card hunt. This is the only map of the three that actually loops back to the first street and expands on it before moving to another area.
Game play is pretty typical; throw a switch and fight the spawned aliens, grab a key card and fight the spawned aliens.
Some of the combat scenarios are a challenge, but none of them were ever unfair.
Health and ammo are evenly distributed, and the select arsenal was provided to combat the specific aliens encountered in the level.

If you like city maps and lots of shooting I recommend this series. 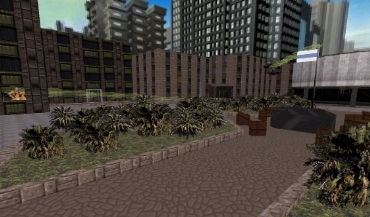 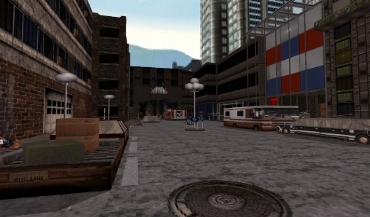 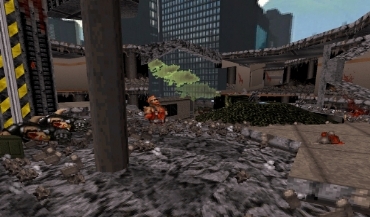 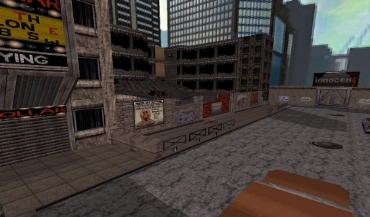 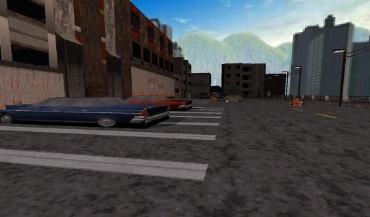 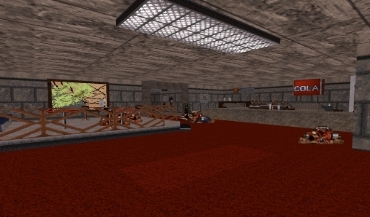