A snow bound city styled map that is under siege and has alien hive elements.
For a city that's under attack it looks pretty clean and tidy, that is until the player starts navigating through the level and things start blowing up. It's apparent that the map has multiple authors when the level of detailing from one major section to the next has a large swing from alot to very little. It's noticeable, but not really that detrimental to the overall ambiance. The only real issues encountered are some severely cramped rooms; especially ones involving swinging doors.

Game play is a key card hunt. The layout can be quite interesting. The basic premise is a double hub with the two street sections acting as the primary locations for getting around. Sometimes the player enters a building then has to back track out to the street. Other times they may end up walking some telephone and power wires to another building and coming out in the street at a different entry point. A little back and forth between the two streets to mate a key with a lock is also required.
The primary speed bump to slow down the map is the underwater maze. The player must find several surfacing areas and hit buttons to open another underwater passage. It's big enough to throw off the flow, but not so big that the player will spend too much time on it nor drown.
The fire fights are pretty constant, but not overwhelming, and combat is well balanced and fast paced to keep the progression entertaining, with the exception of an abnormal amount of atomic health pick-ups. 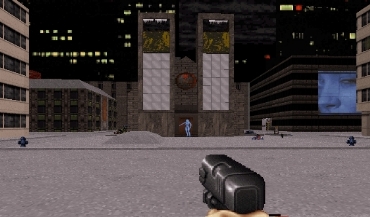 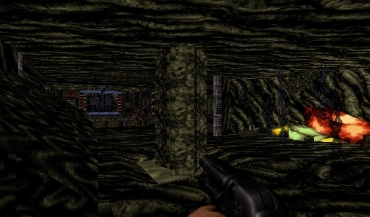 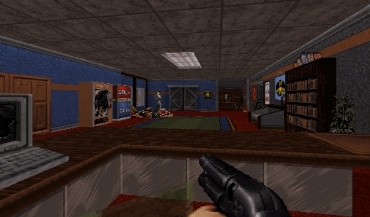 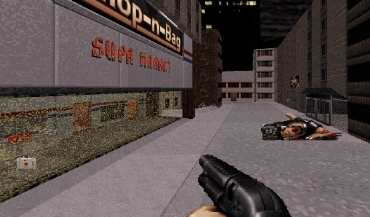 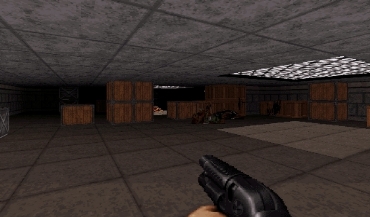 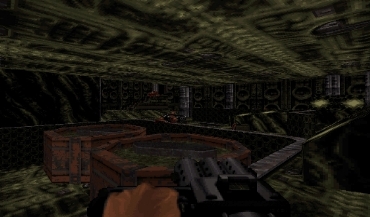